Phebe Lord, the woman who would become one of the greatest thorns in the side of her Congregational minister, was born on March 20, 1804 to Nathaniel Lord and Phebe Walker. When Phebe was 8, her family moved to Kennebunkport, where her father was known as the richest man in the county.

Shortly before her marriage to Thomas C. Upham, her family’s wealth afforded Phebe a trip to New York City, where she was painted by the renowned American artist Gilbert Stuart. Stuart, who had painted the Founding Fathers and thus earned the title “The Father of American Portraiture”, was 70 at the time and afflicted with partial paralysis. Yet he was reportedly so enamored with the beautiful Phebe that he had longed for the opportunity to paint her. The resulting portrait now finds it home among many other Stuart portraits at the Bowdoin College Museum of Art. But Gilbert Stuart was not the only person who had fallen in love with Phebe Lord.


Engraving of Thomas C. Upham from a daguerrotype, by J.C. Buttre. From the Pejepscot Historical Society, acc# OH 1972.a.

Phebe’s future husband, Thomas C. Upham, was born in Deerfield, New Hampshire on January 30, 1799 to a state congressman. He earned both his Bachelor’s and Master’s degrees from Dartmouth (1818 and 1821, respectively) after preparing for college at Gilmantown Academy. After Dartmouth, he studied theology and became a pastor in Rochester, New Hampshire, where his family had relocated while he was a boy. After serving his parish for just 1 year, Upham earned a position at Bowdoin College as the college’s first professor of Mental & Moral Philosophy, a subject he would teach until he left the school in 1867. One year after joining the college faculty, Thomas C. Upham married Phebe Lord on May 18, 1825.

At Bowdoin, Upham was known as “one of the greatest detectives on the faculty”, able to sniff out a student’s mischievousness. Though he was noted for being painfully shy, during his lifetime Upham was able to raise for than $70,000 for the school (approximately $1 million today, adjusted for inflation). He also wrote the enormously successful book Mental Philosophy, which went though 57 editions in just 73 years. 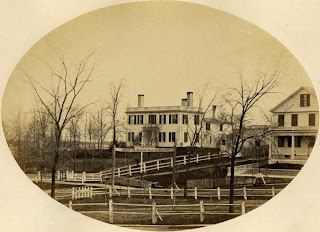 The Upham family home at 179 Park Row, circa 1870. The building, which was probably designed by Samuel Melcher III, is now the local Elks Lodge. When it was built in 1817 it was one of the town's costliest houses to construct. Note the terraced lawn, which still exists today. From the Pejepscot Historical Society, acc# OH 2153.1

One of the Upham’s greatest claims to fame was his role in persuading Calvin Stowe to join the Bowdoin faculty. Stowe brought along his wife, Harriet Beecher, who instantly befriended Phebe. After Harriet’s ill-fated arrival in Brunswick (for more information, see the blog post about William Smyth), Phebe lent Harriet bedding, helped arrange for a housekeeper and showed her around Brunswick. It was while sitting in the Upham family pew (#23) at the First Parish Church that, in March of 1851, Harriet Beecher Stowe had a vision which inspired her to write Uncle Tom’s Cabin.

Like Harriet Beecher Stowe, the Uphams passionately believed that slavery should be abolished. The Uphams, like William Smyth, used their home as a stop on the Underground Railroad for escaping slaves. Harriet Beecher Stowe herself records that she sent an escaping slave to the Uphams, who fed, sheltered, and gave the slave money. Thomas C. Upham was a proponent of the “Back-To-Africa”, or colonization, movement. He believed that American slaves should be returned to African countries like Liberia. Upham served as the vice president of the American Colonization Society and even contributed an impressive $1,000 to the cause (approximately $14,000 today).

Like we have seen in so many of his contemporaries, however, Thomas C. Upham did not limit himself to one cause. He was a supporter of temperance and was among the first people to sign the Brunswick temperance pledge. Upham also opposed capital punishment, which was not abolished in Maine until after his death. Thomas C. Upham was also a strong supporter of the peace movement, a belief he had developed during the War of 1812. He supported the cause for peace by serving as the vice president of the American Peace Society and publishing many works championing peace under the pseudonym “Perier”.

Thomas C. Upham appears to best known for his role in helping to legitimize the holiness movement.* Followers in the holiness movement believe that though the body was corruptible, it was possible to attain full salvation while on earth. Around 1839 Upham became the first man to attend the meetings of Phoebe Palmer, an early practitioner of the movement. Impressed by what he learned, he helped popularize the movement, which some historian argue influenced the structure of Uncle Tom’s Cabin. But it appears that Upham did not stumble upon Phoebe Palmer by himself—rather, it was his wife Phebe who urged him to visit a meeting. 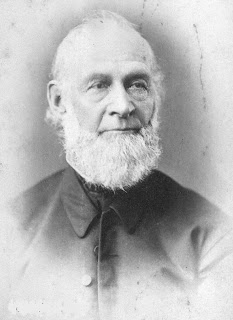 Like her husband, Phebe Upham was passionately devoted to what she believed in. An outspoken woman herself, Phebe balked at the rule preventing women from speaking in church meetings. Thanks to the fact that Rev. George Adams, the adoptive father of Frances Caroline Adams Chamberlain and pastor of the First Parish Church, kept an exhaustive journal, we know that Phebe would often visit Adams to argue her case. She would apparently often charge into the reverend’s study unannounced and uninvited and engage Adams in heated arguments over the rule.

In addition to her feminist causes, Phebe was also a writer. She wrote a booklet about the life of Phebe Ann Jacobs, a freed slave living in Brunswick, for the American Tract Society. Several scholars have noted parallels between his booklet and Harriet Beecher Stowe’s Uncle Tom’s Cabin and believe the booklet also inspired Stowe. Phebe accomplished all of this while raising her 6 adopted children (4 boys and 2 girls) at the Upham home at 179 Park Row.

Thomas C. Upham left Bowdoin College in 1867 and he and Phebe relocated to her hometown of Kennebunkport. In 1872, while visiting his brother in New York City, Thomas suffered a stroke. He died on April 2 and his body was brought back to Brunswick. His funeral was held in the First Parish Church on April 4, 5 years to the day of Prof. William Smyth’s death—in recognition of this fact, both services featured the same song, “Who Are These in Bright Array”. Prof. Alpheus Spring Packard presided over the service.

Phebe continued to live out her life in New York City, often visiting her children. She died there peacefully on March 18, 1882. A Brunswick newspaper describes her death:
“On Saturday the servant took up a lunch to Mrs. Upham’s room, finding her seated, and apparently as well as usual. Two hours later the servant went to her room, to found the tea spilled upon the carpet, the lunch untasted, and Mrs. Upham seated in her chair with her head reclining to one side; a closer observation showed that she was dead, having passed away in that interval of two hours, with no eye to watch her, but evidently without a struggle” (Tenney, Phebe Upham’s obituary, 2). 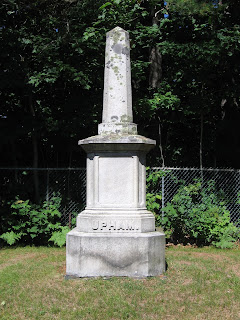 The Upham monument in Pine Grove Cemetery, located just past the grave of Parker Cleaveland. Though only Thomas's dates and initials are inscribed on the stone, newspaper articles indicate that Phebe is buried here as well. Her obituary in the March 24, 1882 Brunswick Telegraph ends "She has come back at last, and rests beneath our whispering pines in the lot in our village cemetery, where rest the remains of her husband."


*The Salvation Army began as a result of the holiness movement.