Colonel Andrew Dennison was, quite literally, the father of the Dennison Manufacturing Company. He was born in Freeport on February 22, 1786. In 1807 he married Lydia Lufkin (1788-1848), who was also from Freeport. Andrew was a cobbler, and after the birth of their first 4 children, Lydia and Andrew moved to Topsham in either 1816 or 1817 so that Andrew could practice his trade. In 1824, they relocated across the river to Brunswick. The couple would go on to have an astonishing 10 children together (there are some sources which say they actually had 15 children, but I found no evidence to support this). 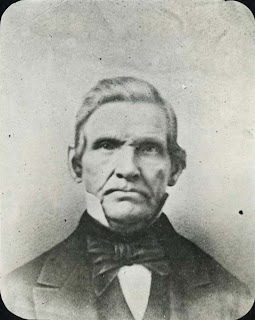 The only known image of Colonel Andrew Dennison. From the Pejepscot Historical Society, acc#1993.22.71.179.

Not surprisingly, Andrew often had a difficult time earning enough money to support his large family. He served as a sergeant of a regiment stationed at Fort Preble during the War of 1812. Yet he did not earn his title until he became a colonel of the Maine state militia. Andrew also served as the Deputy Sheriff of Cumberland County and tried at his hand at farming and local politics, with little success. In the early 1840s Andrew considered moving out of Brunswick to try his luck elsewhere, but ultimately decided to stay put.

Then, Andrew’s oldest son (and his third child) Aaron, a Boston watchmaker, enlisted his Brunswick family to make boxes for him in the fall of 1844. Aaron was so unimpressed with the quality of the jewelry boxes he had been receiving from overseas, he decided to have his family make them for him. The story goes that Aaron would travel to New York, purchase the box-making supplies, sent them to Brunswick where Andrew and his daughters Julia and Matilda would assemble them, and then the finished product would be shipped back to Aaron, who in turn would use and sell them to other jewelers. 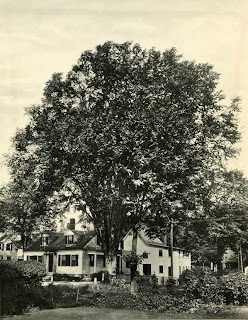 The boxes became popular almost immediately. The family began producing them in a room in the second floor of their house, with Andrew cutting the plasterboard by hand at his cobbler’s bench and Julia and Matilda folding and pasting them together. Eventually, Andrew got fed up with the slow process of cutting the boxes by hand and designed a machine to do it for him. The result was the first box cutting machine ever made, which was utilized by the company for many years thereafter.

At first, the Dennison box company was shared by Andrew, Aaron and Andrew’s 3rd oldest son (his sixth born child), Eliphalet, who was more commonly known as E.W. By 1850, Aaron had decided to focus on his watch-making and decided to sell his portion of the business to his brother E.W. With this development, E.W. and his father began to butt heads over issues such as box quality and price, and Aaron was often forced to serve as a mediator between the two. At one point, Andrew even threatened to take the business away from E.W.

In 1850, E.W. wanted to move production of the boxes from Brunswick to Roxbury, Massachusetts, but Andrew balked at this proposition. E.W. eventually conceded. By this time, the company had moved their factory from the Dennison homestead to the second floor of the Poland Block building on Maine Street, where the company employed about 30 people. By 1855, Andrew had had enough bickering with E.W., and decided to sell his portion of the company to E.W. on February 1 for $8,000, with an additional $1,000. The Dennison Manufacturing Company would eventually become the largest box company in the United States and would branch out to make many other products. In 1990, the company merged with Avery to become Avery Dennison, a leading producer of office supplies. 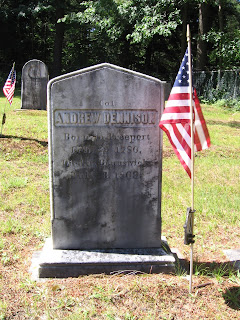 The gravestone of Colonel Andrew Dennison, located 5 lots from the back in the first row on the right.

Freshly retired and no longer worried about money, Andrew lived out the rest of his life in leisure. After Lydia died in 1848 he remarried and traveled often. His obituary describes him as an early supporter of the causes of temperance and anti-slavery. One of Andrew's greatest passions, however, was time keeping—perhaps where his son Aaron got his passion for watches. He actively campaigned for accurate time keeping in Brunswick, and helped procure the town clock and bell at the Mason Street Church. In addition, he frequently visited the college sundial to ensure that his own watch was correct. In his last years, Andrew apparently was still quite active in mind and body. After a brief unidentified illness, he died on July 3, 1869 at the age of 83, as, according to John Furbish, one of the town’s oldest citizens.