Of the 119 people who had their biographies printed in Wheeler & Wheeler's 1878 book History of Brunswick, Topsham and Harpswell, Dorothy Giddings has the distinction of being the only woman. What did Dorothy--or "Dolly" as she was usually known--do to leave such an impression on the town?*

Dolly was born in Exeter, New Hampshire in January 1785, the second of the five children of Gen. Nathaniel Giddings (1760-?) and Anna Folsom (1762-1794). Through her mother, Dolly was related to Sarah Ann Folsom, the first wife of Rev. George E. Adams and the adoptive mother of Fanny Chamberlain. It appears that Dolly's father died while she was still young, because she was later sent to live with her grandfather and after that her uncle, Rev. Rowland, a pastor of the First Congregational Church in Exeter. In 1812 at the age of 27, Dolly first came to Brunswick and lived with Captain Richard Toppan, a relative of hers by marriage. For the next three years, she opened a private school and later lived with Bowdoin College President Jesse Appleton and his family. In 1815, Dolly left Brunswick to live with her sister Polly Bailey in Newburyport, Massachusetts, where she continued to teach.

In 1818 Dolly Giddings returned to Maine, but in a most challenging manner. Thanks to funds from an unidentified "Boston gentleman", Dolly decided to open up and teach at a mission near Foxcroft and Brownville, Maine. There, she lived in a crude log cabin without a door, while teaching the youth of the area and even acting as a nurse to the sick, "exert[ing] her skill in the knowledge of disease" (Wheeler & Wheeler, 744). Once, when poverty in the area became overwhelming, Dolly travelled 250 miles on horseback to solicit help from her friends, returning to Foxcroft & Brownville with desperately needed supplies. 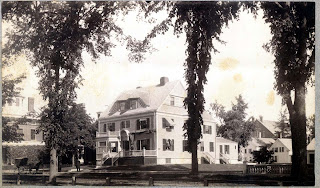 The Dr. Alfred Mitchell house, which stands at the corner of Park Row and Green Streets at the site of Dolly Gidding's first store in Brunswick, which she operated with her sister Harriet Boardman. From the Pejepscot Historical Society, acc# 2008.93.

Dolly was finally torn away from the Maine wilderness when she heard that her sister in Newburyport was dying. Never able to turn away from someone in need of help, in 1824 Dolly went to Massachusetts to be by Polly's side. After this, Dolly moved back to Brunswick with her other married sister, Harriet Boardman, where the two opened up a millinery store on the corner of Green Street and Park Row. About five years later the sisters relocated their store to the corner of Maine and Mason Streets. Eventually, Harriet opened up a store of her own in the Dunlap Block (the same space later occupied by B.G. Dennison) and Dolly moved across the street to the corner of Maine and O'Brien (now Cumberland) Streets. She lived and worked at this location until her death. 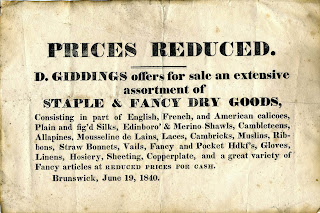 Wheeler and Wheeler's biography of Dolly describes her Maine & O'Brien Street store: "Her stock was always large and of superior quality, and comprised not only of millinery goods, but almost every conceivable article of feminine apparel. Her counters and shelves were piled promiscuously with all sorts of articles and apparently in the greatest disorder, yet she could always quickly find any desired article, no matter how deeply it might be covered with other things." (588) John Furbish, another contemporary of Dolly's, described her store as a "land mark" (sic). Dolly also spent each of her last 46 years deeply involved with the Sunday School at the First Parish Church. Her renowned kindness and generosity led to her home being a known sanctuary for the poor and the ill. 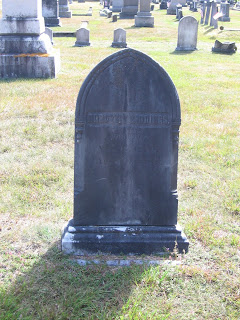 The gravestone of Dorthy "Dolly" Giddings, located near the back of the sixth row from the right.
Dolly Giddings died on October 31, 1870 at age 85. Prof. Alpheus Spring Packard supplied the eulogy at Dolly's service at the First Parish Church, which was reprinted in her obituary in the Brunswick Telegraph. Packard ended his speech by saying "It needed not these statements to show that one departed friend was a woman of no common mould. Energy, decision, determination, a deep foundation of benevolence, strong individuality of character, were unmistakably revealing themselves in her daily life".

*This question really should be, "What didn't the hundreds of other women who had lived in Brunswick up until 1878 do to not deserve their biographies printed in the book?"