What can a gravestone tell you? Besides the obvious--date of birth, date of death and the deceased's name--all sorts of interesting information can be discovered.
This is certainly true for many of the graves in Pine Grove Cemetery. James Herbert Fuller's grave tells us that he died in Brunswick on January 29, 1856 at the age of 7 years and 9 months. But it also tells us his last words: "I never shall be weary, not ever shed a tear, nor ever know a sorrow, nor ever feel a fear." Do you know any seven-year-old who could be so poignant? 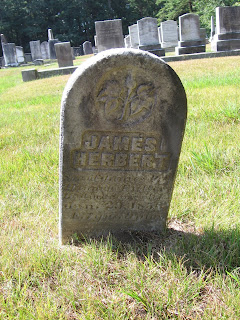 The gravestone of James Herbert Fuller, which can be found in the second row from the right. James' last words are now partially buried, as his gravestone appears to be settling into the ground.
Unlike Fuller, Lois Cook Bartlett lived a long life, from 1768 to 1857, when she died at the age of 89. Her grave celebrates this, listing the names of her daughter, granddaughter, great-grandaughter and great, great grandson. Her (rather confusing!) epitaph reads: "Arise daughter and go to thy daughter for thy daughter's daughter has a son. Five generations were present at her burial."
A gravestone can also teach us how someone earned their living. The Skolfields were obviously a seafaring family--each member died in a different part of the country. In 1826 at the age of 39, Captain Samuel Skolfield died at Old Point Comfort, Virginia. His son, Captain Curtis, died at Salilla River in Georgia in 1852 at the age of 28. Another of Samuel's sons, Reed, died "at sea" on Christmas Eve, 1834 at the age of 18.
The seafaring Minot family was an extremely well-traveled group. Captain John Minot died in Lubec, Maine in 1825 at the age of 58. His oldest son John died in the Bahamas in 1840, his middle son Henry died in Mobile, Alabama in 1842 and his youngest son George died on the coast of Africa in 1832. Stranger still, John and his son Henry died on the exact same day--February 7--17 years apart.
Perhaps most interesting of all, a gravestone can tell of how someone died. By far, the most common cause of death listed on the graves in Pine Grove is drowning. Frederic W. Humphreys, son of John C. Humphreys, died on November 18, 1848 at the age of 12 years, 9 months. He had fallen through the ice while skating. His epitaph reads: "It is better to die endeavoring to give life than to die attempting to take life."

Edward Clarence Metcalf did not drown, but water did indirectly cause his death. Metcalf died at the age of 23 in 1880. His epitaph reads: "Died of Malarial Fever contracted in the performance of arduous duty as engineer in charge of the sewerage of Memphis." Fun fact! According to at least one estimate, half of all the people who have ever lived on earth were killed by malaria, a mosquito-borne parasite. 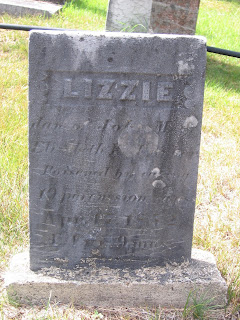 The small gravestone of Lizzie Parker, who is buried in the third row from the right.
Of all the causes of death listed on the graves at Pine Grove, however, Lizzie Parker's stands out. The daughter of John M. and Elizabeth K. Parker, Lizzie was just 1 year and 9 months old when she died. Her epitaph reads: "Poisoned by eating 19 percussion caps."

The next time you travel past a cemetery, consider exploring it. Local cemeteries are a wealth of information, teaching us how our ancestors lived, worked and died.
For more interesting New England epitaphs, click here.

Special thanks to Barbara Desmarais, who told me about Edward Metcalf's grave, and whose knowledge has been indispensable in creating this blog.
Posted by Rebecca Roche at 9:33 AM