Pine Grove Cemetery has one receiving tomb, which sits on Pine Street. A receiving tomb was an important building in any graveyard that was subject to harsh winters. The bodies of those who died in the winter were stored in a receiving tomb, so that they could be buried in the spring when the ground was softer.

Silent City on a Hill, a book about Mount Auburn Cemetery near Boston, notes that receiving tombs had other uses as well. Bodies were stored there for short periods if the grave was not ready, or if a monument or tomb was not complete, or even if the body was to be shipped somewhere else. Storing a body in a receiving tomb had an added perk of preventing the "dead" from being buried alive, if in fact they were not dead. Check out an interesting article about the history of live burial--and the precautions taken to prevent it--here.


"Handsome Structure Recently Built in Pine Grove Cemetery.
"The new receiving tomb at Pine Grove Cemetery recently completed by the Sanders Construction Co. of this town is probably the first tomb in this part of the country to be built of concrete. The structure was built from the plans drawn by E.E. Sanders. Although the trustees of Pine Grove Cemetery were advised by Massachusetts men not to build of concrete, the results have been so satisfactory that men are coming here from various places in Maine and Massachusetts to examine the new tomb.

"The building replaces the old mound tomb, and is situated in the southeast corner of the cemetery, near the Bath road. The outside dimensions are 18 x 23 feet; extreme height 14 feet. The inside measurements are 16 x 20 feet and its is designed to hold 34 caskets.

"The entire structure is of concrete, including the roof, which is made in one-piece construction, reinforced with steel. The concrete mixture was one part cement, two parts of sand and four parts of crushed granite. The wall, which is thirteen inches thick, embodies the new plan of making the tomb damp proof, the inside being constructed of gypsum tiles, with an inch air space between the concrete wall and the tiling. This plan obviates the dampness of ordinary concrete construction.

"The doors are of steel; the finished portions of the exterior have been rubbed with carborundum brick, and the panels were bush hammered to represent stone work.

"As will be noticed by the accompanying illustration, the architecture is plain Grecian, on the lines of the well-known Greek temple, giving a dignity and harmony that is unusual in such construction.

"The cost of the tomb was about $2500, and the work was done under the direction of a committee composed of E.H. Woodside, I.H. Danforth and J.S. Towne, trustees of Pine Grove Cemetery Association. They had good reason to feel proud of the structure, as it marks an important improvement in the cemetery, and adds beauty and dignity to the grounds.

"Mr. Sanders, head of the E.E. Sanders Construction Co., is receiving many compliments for his work. His company, which has recently been incorporated, makes a specialty of concrete and bridge work, and the plan is to have men of prominence in all branches of engineering included in the corporation." 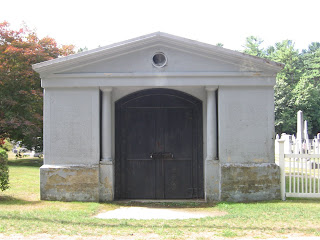