Benjamin Griffin Dennison was born to Colonel Andrew Dennison and Lydia Lufkin in Freeport on August 23, 1814. He was the second-oldest son in the family of 10 children, and the fourth born. Unlike his father, younger brother E.W., and younger sisters Julia and Matilda, B.G. (as he was known) decided not to become involved in the family box business. Rather, B.G. tried many different careers. 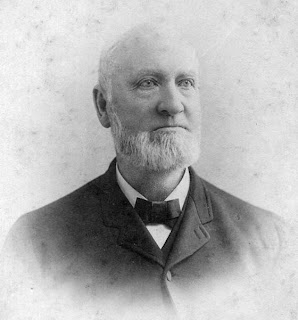 Photo of Benjamin Griffin Dennison, prominent Brunswick citizen.
From the Pejepscot Historical Society, acc# OH 1726.32.f.
The first reference to what B.G. did for a living comes from Wheeler & Wheeler. They write that B.G. operated a bookbindery "from about 1833 until 1855, when he sold out to H.J.L. Stanwood" (579). During that time, on October 8, 1838, B.G. married Susan Towns. The couple had two children, Susan Jane (born 1841) and Benjamin Lithgow (born 1843). B.G.'s son would later follow in his father's footsteps and pursue many of the same career paths.

We next find B.G. in 1859 as an officer in the Brunswick Gas-Light Company, a local utility which existed before electricity and provided light for homes and streets. Many of the old buildings in town, such as the Joshua L. Chamberlain Museum and the Skolfield-Whittier House, still bear the evidence of these gas lights, including gas fixtures rewired for electricity. On April 8, 1861, B.G. took on yet another job, this time as postmaster. Appointed to the position by President Lincoln, B.G. delivered local mail for about 6 years. According to his obituary, B.G.'s political views prevented him from working during the Andrew Johnson administration, and "he was removed from his office." 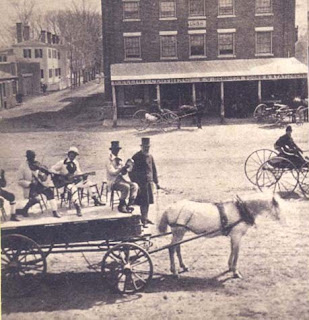 B.G.'s stationary store in the Dunlap Block on Maine Street in Brunswick, pictured in the background on the right side (the name of the store is barely visible on the awning) as a minstrel show passes by. From the Pejepscot Historical Society, acc# OH 1542.5.h.
Finally, in 1868, B.G. settled into a more permanent career. He opened a stationary store on the first floor of the Dunlap Block on the corner of Maine and Dunlap Streets in Brunswick. Not incidentally, the second floor of the building served as a factory of the Dennison Manufacturing Company, run by B.G.'s siblings Matilda and E.W. B.G.'s store was a five-and-dime and bookstore, but primarily specialized in fine paper goods like wrapping paper and later sold many photos of the area. The store even operated a circulating library, as it preceded the local public library. In 1887, B.G. passed control of the store over to his son, B.L., and appears to have retired. 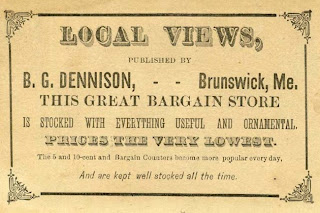 Advertisement for B.G. Dennison's store printed on the back of a stereograph sold there. From the Pejepscot Historical Society, acc# 1982.95.6.
Like his father and sister Matilda, B.G. was a devoted member of the Mason Street Universalist Church. He was also a member of the Mozart Society, a Brunswick/Topsham group dedicated to "the cultivation of musical tastes and..social intercourse" (Wheeler & Wheeler, 246) and the local chapter of the Independent Order of Odd Fellows. Before the rise of the Republican party, B.G. was a staunch supporter of anti-slavery. In 1852, he campaigned for Free Soil party candidates John Parker Hale and George Washington Julian in the presidential election (the Free Soil party was a precursor to the Republican party--both held strong anti-slavery views). Fun fact! John Parker Hale's daughter, Lucy Lambert Hale, was engaged to John Wilkes Booth. When Booth was killed in a shoot-out after Lincoln's assassination, a photo of Lucy was found on his body.

B.G. Dennison died on April 19, 1897 at the age of 83. Though his obituary does not mention his cause of death, it does laud the man as "a gentleman of affable and social disposition, a kind husband, an indulgent father, and having lived a correct life, is mourned by many." 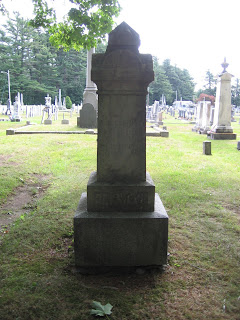