Pine Grove Cemetery: An Introduction to the Dead 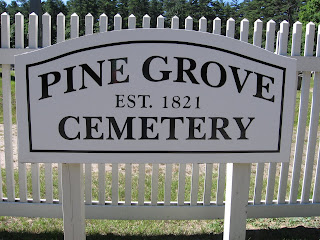 Pine Grove Cemetery, located just off Bath Road & Pine Street in Brunswick, Maine, is arguably the region’s most prominent cemetery. Men & women who have impacted the history of the United States, Maine and Brunswick all lay buried beneath the towering pines which lend the cemetery its name. Among these dead are a Civil War hero, Maine’s most famous botanist, a physician who developed vital forensic tests, the parents of a First Lady, two Maine governors, a slew of Bowdoin College presidents & professors (including the “Father of American Mineralogy”), librarians, Revolutionary War veterans, a former slave, sea captains, and the state’s first printer.

The cemetery is located on land which once belonged to Bowdoin College, which sits directly next to it. In 1821 Bowdoin’s trustees deeded the land to Pine Grove’s first proprietors, Robert Eastman, Nahum Houghton, Abner Bourne “and their associates, heirs, executors, administrators, or assigns”. The two acres were given with the stipulation that the college could take back the land if it were not used as a burying ground. 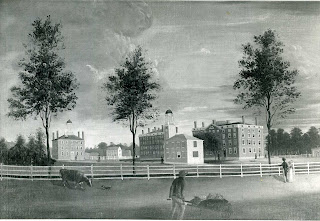 Painting of Bowdoin College, circa 1825. From the Pejepscot Historical Society collection, acc# 1992.112.84.
But there was no need for the college to worry about the fate of the land. In 1825 the cemetery land was cleared “carefully and selectively” as Teresa M. Flanagan, author of Mourning on the Pejepscot puts it, “not stripped clean as it had been for early town burial grounds.” Though this was six years before Mount Auburn Cemetery near Boston—“America’s first garden cemetery”—Pine Grove Cemetery might qualify as a part of the rural cemetery or “cemetery beautiful” movement if not for its location. Rural cemeteries were carefully landscaped and designed, intended to serve as parks do for communities today. Yet, unlike Pine Grove, rural cemeteries were intentionally placed on the outskirts of cities & towns where there was more room for expansion and the grounds were more rolling and picturesque. Pine Grove Cemetery is where it is because it was closer to Brunswick’s population center.

Before the 1820s, the town’s most prominent graveyard—the old First Parish Church Burying Ground—was located next to the meetinghouse on the 12 rod road (now Maine Street). When the church moved closer to downtown Brunswick (its current location) a new cemetery, closer to First Parish Church, was needed. The college stepped in, providing the land for the graveyard. Not only did the town’s most prominent cemetery move from the old First Parish Church Burying Ground to Pine Grove Cemetery, a few of the dead did as well. Bowdoin College’s first two presidents, Joseph McKeen and Jesse Appleton, had each died before Pine Grove Cemetery was established. After the new cemetery was laid out, the remains of both men were relocated to the new cemetery to rest on the land that had once belonged to the college they presided over.

Nearing its 200th birthday, Pine Grove Cemetery continues to hold an important place in Brunswick's past, present and future. According to a 2005 survey by Mark & Donald Cheetham, there are 2,491 marker stones in the cemetery and the earliest death recorded on a gravestone is 1794 (the same year Bowdoin College was founded). Yet, despite its age, the cemetery is active and continues to serve as the final resting place of the area's residents.