We know relatively little about Major Lemuel Swift, and most of what we do know comes from Wheeler & Wheeler's History of Brunswick, Topsham and Harpswell. Born sometime in 1767, Swift "probably" descended from William Swift of Sandwich, England. (Wheeler & Wheeler, 856) According to the Wheelers, Lemuel Swift arrived in Brunswick in 1790 from New Bedford, Massachusetts. A year later, Swift had set up shop as a hatter on Maine Street, a profession he continued until his death.
The Swift-Forsaith House at 106 Maine Street, built for Lemuel Swift in 1794. This photo was taken in 1967, shortly before the building was razed. From the Pejepscot Historical Society, acc# OH 1851.
A document at the Pejepscot Historical Society (acc# 2000.68) indicates that in 1802, Lemuel Swift was appointed as a captain of the militia. Sometime between then and his death he was most likely promoted to the rank of Major, the title with which Wheeler and Wheeler frequently refer to him. Swift also seems to have been a popular Brunswick resident, as in July 1803 he was appointed postmaster. Apparently Swift was unaware that he was up for the position, because he turned down the job. Swift was also a charter member of the Universalist Society of Brunswick in January, 1812. 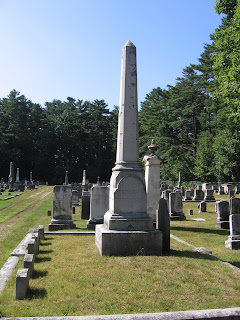 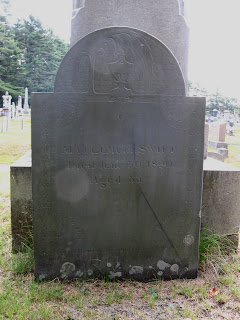 Top: The family gravestone of the Swifts, located in the second row from the right.
Bottom: Though Lemuel is listed on the northern side of the stone, it appears that his original, simpler stone was not removed when the obelisk was added (or perhaps this slate stone was at Swift's original grave at another cemetery, and when he was moved to Pine Grove his relatives paid for a larger monument). Swift's smaller gravestone is seen here, leaning against the larger monument.
Despite his apparently high position in town, Lemuel Swift's name lives on for two reasons that he had relatively little control over: his home and his death. In 1794, he built his home at 106 Maine Street. The house, which became known as the Swift-Forsaith house, was home to his descendants for more than 130 years. When it was torn down in 1967, it was the oldest house on Maine Street. Lemuel Swift died on June 30, 1820--he was the first person to be buried in Pine Grove Cemetery.

Special thanks to Ann Frey, who helped research Major Lemuel Swift.
Posted by Rebecca Roche at 9:35 AM