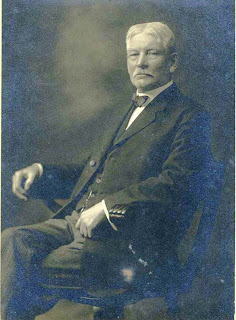 
Henry Leland Chapman was born in Bethel on July 26, 1845 to Elbridge and Delinda Twitchell Kimball Chapman. When he was still a boy, his family moved to Portland, and he attended Gould’s Academy and Gorham Seminary before college. He entered Bowdoin College in 1862.
As a student, Chapman excelled in sports and English. For three years he was a pitcher for “the college nine” (the baseball team) and also rowed in with crew. Chapman also served as class poet for both his freshman and senior years, and was the senior editor of The Bugle, Bowdoin’s yearbook. He was also a member of the Alpha Delta Phi fraternity and graduated in 1866 with Phi Beta Kappa honors.

Chapman’s most popular contribution to Bowdoin College has to do with Ivy Day, a tradition which continues to be celebrated by students. The first Ivy Day was held on October 26, 1865, when the junior class planted ivy near the chapel. Chapman is usually credited with instituting this tradition, and he served as odist on the fateful day. Ivy Day traditions later included the awarding of a mirror to the most handsome student and a wooden spoon to the most popular student. (Learn more about the history of Ivy Day here.)

After graduating with his Bachelor’s degree, Chapman continued his studies at Bangor Theological Seminary, where he graduated in 1869 with a Master’s degree. Shortly thereafter, he accepted a position at Bowdoin as a tutor in Latin and Mathematics, becoming a full profess in 1872. As a professor, he taught Latin for 3 years before turning to his true passion, English literature, which he taught until his death. On August 21, 1870, he married Emma Caroline Smith from Gorham. The couple lived at 79 Federal Street, which is now owned by the college. Emma died on June 14, 1892.


Chapman's home at 79 Federal Street, one of the oldest home on the street. The house, built circa 1790, was originally located on Maquoit Street, but was moved to its present location by David Stanwood in 1821. From the Pejepscot Historical Society, acc# OH 1830.a.
As a Bowdoin professor, Henry Leland Chapman has a mixed legacy. His obituary celebrates his excellent memory, stating that “frequently in the course of his lectures he would stop and recite poem after poem from the works of Burns, Byron, Scott, Coleridge, Wordsworth, Tennyson and Browning”. However, Chapman became quite unpopular when he fought against the practice of hazing—many students and even some faculty members were strongly in favor of the ridiculous tradition. Least progressive of his teaching methods was what college historian Louis C. Hatch calls Chapman’s requirement of “a strict adherence to the text-book” by his students (Hatch, 177). Rather than encouraging students to think for themselves, Chapman preferred that they recite the thoughts of their textbook’s author.

Despite any faults he may have had, Chapman was always loyal to his alma mater. After the resignation of Joshua L. Chamberlain, Chapman assisted Alpheus Spring Packard with the duties of interim president. After Packard’s death, Chapman carried on alone as Dean of the College. He was even considered for the position of college president, but the board ultimately decided to hire someone more progressive—they would ultimately choose William DeWitt Hyde.


Besides his involvement in Bowdoin College, Chapman was a key figure in many state organizations. He served as a trustee for the Maine Missionary Society, Bangor Theological Seminary, State Normal Schools, and the Bible Society of Maine and served as vice president of the Maine Historical Society. Chapman was also a key figure in Brunswick. He was the official poet for the 150th anniversary of Brunswick, was a founding member of the Pejepscot Historical Society and later served as its president, was a charter member of the Public Library Association and of the Village Improvement Association.

At the age of 66, Chapman’s health began to decline. In January 1912, he broke his arm in a fall and was housebound until the following June. A year later, Chapman became ill with what his obituary reported as Bright’s disease, an affliction of the kidneys. He died on February 24, 1913 at 2:30am. Town officials attended his funeral and all stores and businesses were closed to mourn the man who had become so intricately linked with Brunswick. 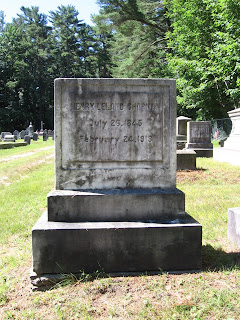