Benjamin Titcomb was born on July 26, 1761 in Portland (which was then Falmouth), Maine. Relatively little is known about his youth. He was the fourth son of Deacon Benjamin and Ann Titcomb and studied at Dummer Academy in Massachusetts. 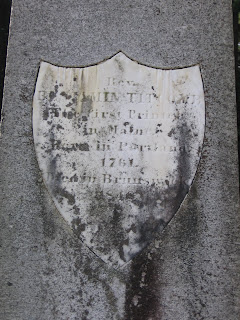 Detail from the monument of Rev. Benjamin Titcomb in Pine Grove Cemetery, which proclaims him "The first Printer in Maine."
Benjamin's fame came from his desire to see a newspaper printed in Portland. Having served as a printing apprentice in Massachusetts, he began to investigate the feasibility of printing a newspaper of his own and partnered with Thomas B. Wait. On January 1, 1785, at the age of 23, Titcomb printed the Falmouth Gazette and Weekly Advertiser. Not only was the first newspaper printed in Maine, it was the first piece of paper printed at the first printing office in the state.
The partnership between Wait and Titcomb dissolved by the next year, but Titcomb continued to work in publishing until 1798. Though he and his wife were Congregationalists, he made a rather interesting career move and began to preach to a new Baptist society group in Portland, becoming ordained in 1801. Some of the first meetings of their group were in Titcomb's own home. After the village Baptist Society was founded in Brunswick in 1803, Titcomb was called here in 1804 as their pastor. Titcomb preached at the Baptist church in Maquoit, and by 1825 there were over 100 members.


Rev. Benjamin Titcomb's home at 63 Federal Street. The house was built for him by Samuel Melcher III in 1806-1807 and cost about $2,000 (about $30,000 today). The house is more famous today as the home of Harriet Beecher Stowe--her husband Calvin and she lived there from 1850 to 1852. During Stowe's time, Benjamin Titcomb's son John was their landlord, and apparently a bad one. Stowe often wrote letters complaining about the poor condition of the home. Photo from the Pejepscot Historical Society, acc# OH 2152.3.
Apparently not all of the Baptist Society members agreed, however. In 1828 or 1829 a few of these people opened their own church on Federal Street as a branch of the Baptist church in Bath. Titcomb, who lived at 63 Federal Street, joined (or perhaps, led) them there, retiring at the age of 83. The Federal Street church "disappeared" after his retirement (Herring, 5). 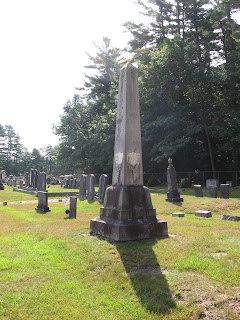 Titcomb's grave in Pine Grove Cemetery, located near the rear of the third row from the right.
According to Wheeler & Wheeler, Titcomb also participated in the formation of Maine as a state separate from Massachusetts at an 1820 convention, beginning the meeting with prayer, and was an original trustee of Waterville College (now Colby College). Titcomb died at his Federal Street home on September 30, 1848 at the age of 87.

Nota bene: Titcomb was married, but I was unable to find any record of his wife's name. She must have been quite a woman--she and her husband had 13 children together.