Parker Cleaveland was born on January 15, 1780 in Rowley, Massachusetts, to physician Parker Cleaveland (senior) and Elizabeth Jackman. Parker, who was an only child, was from what Louis Hatch called “good old New England stock”. Among Parker’s relatives are Moses Cleaveland, the founder and namesake of Cleaveland, Ohio, and president Grover Cleveland. 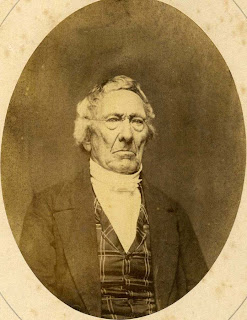 Photo of an older Parker Cleaveland. From the Pejepscot Historical Society, acc# OH.1948.c.

Parker was prepared for college early, and attended Dummer Academy, later entering Harvard at age 15. In 1799 he received his Bachelor’s degree and in 1802 his Master’s, both from Harvard. After graduating with his Master’s, Parker took a job as tutor at Harvard in the subjects of mathematics and natural philosophy.

Parker never intended to spend his life teaching, instead planning on a career in law, and turned down at least one offer from Bowdoin College to join their faculty. Professor John Abbott was finally able to convince him to teach at the Brunswick college and on October 23, 1805, Cleaveland became Bowdoin’s first professor of mathematics and natural philosophy.

Parker Cleaveland would spend the rest of his life teaching at Bowdoin, becoming, in college historian Louis Hatch’s estimation, “one of the greatest teachers that Bowdoin ever had” (Hatch, 28). Cleaveland was an extremely popular lecturer, renowned for giving “exciting classroom demonstrations” (Bowdoin College website). But he did not limit his involvement with Bowdoin to teaching. Cleaveland was also a driving force in the establishment of the now-defunct Maine Medical School at Bowdoin. Additionally, Cleaveland served as interim college president after William Allen was dismissed. Later, Allen was rehired, only to later resign—after his resignation, Parker Cleaveland was offered the presidency, but turned it down.

Parker Cleaveland's signature on a scrap of paper. From the Pejepscot Historical Society, acc# 2006.32.

But for of all of his accomplishments with the college, Parker Cleaveland is perhaps best known for his contributions to American geology and mineralogy. Cleaveland became interested in the subjects when, in 1807, he was called to a site along the Androscoggin River. There, a group of men had been excavating a ledge, attempting to make the river more passable for the lumber drives. During the dig, a large number of minerals that appeared to be diamonds and gold were discovered. A Bowdoin College scientist was called for and Cleaveland was summoned, only to be just as ignorant of the identity of the minerals as the working men (the minerals were actually iron pyrite, aka “fool’s gold”, and quartz).

His interest piqued, Parker Cleaveland began to collect rock specimens and study available texts on geology. He noticed a lack of American geology textbooks, so in 1816 he published An Elementary Treatise on Mineralogy and Geology, the first major American mineralogical textbook. This brought Packard great fame, including offers from other colleges for twice his Bowdoin salary (which he turned down), a mineral named after him (Cleavelandite, a type of white Albite), and earned him the title “Father of American Mineralogy.”

Cleaveland’s personal life also reflected his devotion to Bowdoin College. On September 9, 1806 he married Martha Bush of Boylston, Massachusetts in Boston. The couple would have 3 daughters and five sons, and at least two of his children were apparently named in honor of the college: James Bowdoin Cleaveland and John Appleton Cleaveland. Not long after arriving in Brunswick, Parker commissioned architect Samuel Melcher III to build him a home. From 1805 to 1806 the Parker Cleaveland House was constructed at 75 Federal Street with a total cost (including land) of $3,200 (approximately $45,000 today). The house, where Parker lived until his death, is now owned by the college and though it was president Robert H. Edwards’ home from 1990-2001, is now used for functions and is a National Historic Landmark.


Not interested in limiting his talents to the college, Parker Cleaveland was also involved in local organizations. He was among the first librarians of the Maine Historical Society, an organization which he was active in until his death. Cleaveland was also the first commander of the Brunswick Fire Company, which was formed after the devastating 1825 fire which destroyed a large section of the town.


Despite these accomplishments, Cleaveland second greatest fame—next to that of being the “Father of American Mineralogy”—was his eccentric nature. He was deathly afraid of lightning. During storms he would lie in bed, taking care that his nightstand was not touching it. Anything that appeared to be an approaching thunderstorm would keep him from leaving the house. His fears appear to have been somewhat allayed once he had two lightening rods installed on his home. Called “a keeper at home”, Cleaveland also hated traveling and was wary of technological advances such as trains, steamboats and even stagecoaches (Cleaveland,* 128). He reportedly refused to cross any body of water except by bridge, and even then would only do so after he had inspected the bridge himself.


Photo of Parker Cleaveland's study, the northeast, 1st floor room of his home at 75 Federal Street. From the Pejepscot Historical Society, acc# 1992.112.100.


Perhaps in the end, Parker Cleaveland’s cautious nature helped him live a long life. Cleaveland died at 8 AM on October 15, 1858, probably from heart disease. The local newspaper reported that “We saw the corpse, a few moments after the Professor died, and the countenance bore an expression of naturalness, calmness and serenity, that told a peaceful departure” (Tenney, “Death of Professor Cleaveland”, 2). Despite his deep-seated fears, Parker Cleaveland lived a life that remains impressive to this day. 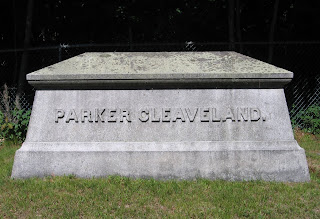 Parker Cleaveland's gravestone in Pine Grove Cemetery, located beside the William DeWitt Hyde family plot. On April 27, 1866 the Brunswick Telegraph reported that "It is expected that the monument to the late Prof. Cleaveland will be erected in our burial ground, over his remains, before Commencement. The monument will be of granite, of severe simplicity of style, such as best accords with the almost childlike simplicity of his character, and which, could he have consented to any testimonial in his behalf, he would select above all others."


Several memorials to Cleaveland survive today. In 1869 the name of Cross Street, just across from Cleaveland’s Federal Street home, was changed to Cleaveland Street, the name it bears today. As the Brunswick Telegraph reported that it was “a fitting mark of respect to the memory of the late Prof. Cleaveland, and besides a good change in itself, as Cross Street now has no significance whatever. It might have had when the village was much smaller” (Tenney, “Town Matters”, 2; emphasis in original). The best tribute to Cleaveland is arguably Henry Wadsworth Longfellow’s poem about his former teacher, which Longfellow wrote when he visited Brunswick 17 years after Cleaveland’s death:


Among the many lives that I have known,
None I remember more serene and sweet,

More rounded in itself and more complete,
Than his who lies beneath this funeral stone.

These pines, that murmur in low monotone,
These walks frequented by scholastic feet,

Were all his world; but in this calm retreat
For him the teacher’s chair became a throne.

With fond affection memory loves to dwell
On the old days, when his example made

A pastime of the toil of tongue and pen;
And now, amid the groves he loved so well

That naught could lure him from their grateful shade,
He sleeps, but wakes elsewhere, for God hath said, ‘Amen!’