In Robert Pinckney Dunlap, Brunswick could hardly have asked for a more devoted native son. Born in a house on Lincoln Street on August 17, 1794, Dunlap would go on to be the first governor to hail from Brunswick. Dunlap remained involved with his hometown for life, devoting himself to its college, church, fraternal organizations and government.
The second youngest of 9 children, Dunlap came from a prominent Brunswick family--his father John was a town representative at the Massachusetts General Court (Maine was not yet a separate state), and his grandfather--Rev. Robert Dunlap--was the first minister to settle in town. Dunlap was prepared for college by a private tutor in Topsham, and later graduated from Bowdoin College in the class of 1815. He studied law for three years under Benjamin Orr in Brunswick and Ebenezer Morely in Newburyport, Massachusetts before being admitted to the bar in 1818. He returned to Brunswick to practice law.


Portrait of R.P. Dunlap by George Swift (husband of Matilda Dennison Swift), 1895. From the Pejepscot Historical Society, acc# OH 84.
Judging from his resume, Dunlap preferred being a politician to practicing law. Described as "an old-school Democrat", his first elected position was as a member of the Maine House of Representatives in 1821, where he stayed until 1823 (Wheeler & Wheeler, 732). Next, he switched to the Maine Senate, serving from 1824 to 1832, during which time Dunlap served as its president for 4 years. Dunlap was elected in 1833 to serve as Maine's eleventh governor, a position he held for four terms (incidentally, this was the same number of terms Joshua L. Chamberlain served), longer than any other governor besides Albion K. Parris. After he left office in 1838 he took a brief respite from politics, before returning to serve in the United States House of Representatives for 4 years, from 1843 to 1847. Like Joshua L. Chamberlain, he served as Collector of Customs at Portland from 1848-1849. In total, Dunlap served 32 years in public office.

Despite a political career which took him from Augusta to Washington, D.C., Dunlap remained involved with Brunswick. In 1825 he married Lydia Chapman (1793-1868), with whom he had 3 sons and a daughter. The family lived in an impressive house at 27 Federal Street, which was probably built by Samuel Melcher III around 1825 or 1826. After serving as Collector of Customs, Dunlap was Brunswick's postmaster from 1853 to 1857. Dunlap was also involved in Bowdoin College, where he served as an Overseer from 1821 until his death--he spent the last 16 years of his life as the President of the Board. 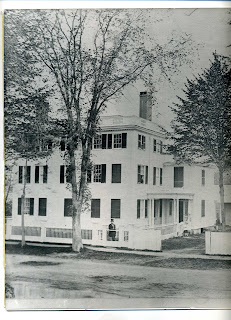 
Besides Bowdoin College, Dunlap could also claim involvement in another great Brunswick institution, the First Parish Church. He converted to Congregationalism during the Second Great Awakening, joining the church in July, 1834. There, his family sat in pew #27, a pew which would doubly earn its title as "The Governor's Pew" when the family of Joshua L. Chamberlain later sat there. Near the end of his life, Dunlap served as a church deacon. Dunlap was also a leader of the Freemasons and a member of the American Bible Society. Like many of his fellow Mainers, he supported the temperance movement. 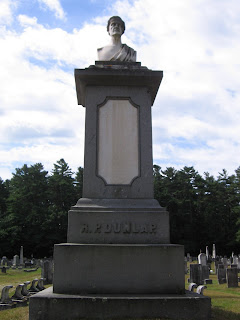 Monument to Robert P. Dunlap, which sits over his grave at the front of the 3rd row from the right. The white panel pictured here is dedicated to his role as a member of the Masonic Fraternity.
Wheeler and Wheeler report that when Robert P. Dunlap died after a week-long illness of typhoid on October 20, 1859, "His burial was accompanied with more ceremony and was more fully attended than that of any other which has ever occurred in town." (733) Four years later, a monument to Dunlap's life was under development. The April 3, 1863 issue of the Brunswick Telegraph reported that famed Portland sculptor Franklin Simmons was in Brunswick "to obtain portraits, photographs, &c., of the late Governor, to aid him in executing the bust, which is to surmount the monument". Below this bust, the monument contains three panels: one about his role with the Masons, one about his political career, and one about his family. Respectively, these panels were paid for by the state's Masons, the state legislature and Dunlap's wife and children. In the end, Dunlap's grave cost $1,000 (about $17,000 today) for the bust alone and about $100 (about $1,700 today) for each panel. Local cemetery expert Barbara Desmarais reports that, ironically, Robert P. Dunlap never wanted a monument, preferring instead a simple gravestone.