Phebe Ann Jacobs was born a slave on the Beverwyck plantation in 1785. She wasn't born in Virginia, in Georgia, or one of the Carolinas. Phebe wasn't born in the South at all, but Morris County, New Jersey. Phebe was probably the daughter* of the farm workers and domestic slaves who were brought from the Danish West Indies to America by the plantation's owner, General Lucas von Beverhoudt. While she was still a young girl, Phebe became the servant of Maria Malleville Wheelock. 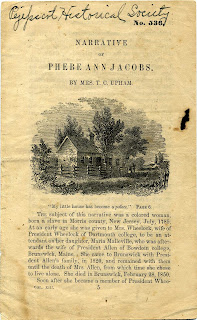 First page of Narrative of Phebe Ann Jacobs, by Phebe Lord Upham. From the Pejepscot Historical Society, pamphlet 227.
By 1817, Phebe had joined a church in Pittsfield, Massachusetts, beginning her life-long devotion to Christianity. Maria, the granddaughter of Dartmouth College founder Eleazar Wheelock, married William Allen and, in 1820, Jacobs and the Allen family moved to Brunswick. There, William Allen became the third president of Bowdoin College. In 1823, Phebe and Maria joined the First Parish Church. Just five years later, Maria Allen died, drastically changing Phebe's future. It seems she may have stayed on in the Allen household until William Allen resigned the presidency and moved in 1839, when Phebe became independent.

Though it is unclear exactly when she became free--one source says the Wheelocks paid for her freedom when they first bought her--they may have felt pressure to free her once they moved her to New England, where abolitionist sentiments were more popular. Either way, when the Allens left Brunswick, Phebe bought a small house of her own, earning money as a laundress and seamstress for Bowdoin College students and faculty.

Phebe is remembered best for her pious nature. She studied her Bible religiously and and was a staple at prayer meetings and church services. Phebe's religious devotion was commemorated after her death in Phebe Lord Upham's pamphlet Narrative of Phebe Ann Jacobs, published by the American Tract Society. 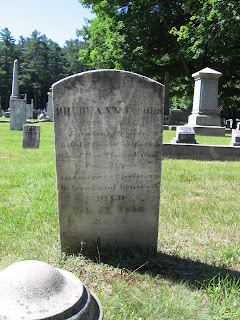 The grave of Phebe Ann Jacobs, which reads: "Born a slave. For about 40 years a faithful friend in the families of Pres. Wheelock and Pres. Allen. An eminent Christian beloved and honored. Died, Feb. 27, 1850, Aet. 64."
Phebe is buried in the Allen family plot near the front of the second row from the right.
Phebe Ann Jacobs died on February 28, 1850, and is described in Narrative of Phebe Ann Jacobs:

"The next morning Phebe's body was found in her bed, cold and lifeless; her eyes calmly closed, the mouth shut, her hands placed by her side, her candle burnt out, her Testament and spectacles by the bedside, the door of her house unbolted; no smoke ascended from her cottage, and Phebe was not--God took her." (page 7)

"The wife of [Rev. George E. Adams] died the same night with Phebe, and perhaps at the same hour of the night...To die with Phebe was a privilege; and the pastor remarked on this occasion, that if his wife had been permitted to choose a companion to accompany her through the 'dark valley,' and into the open portals of heaven, she would have chosen Phebe." (page 8, emphasis in original)

Phebe's funeral was attended by Brunswick's most prominent citizens, and the Allen family even traveled from 200 miles away to pay their respects to their former servent. Her service was held in the First Parish Church, the church she held so close to her heart. Professor Alpheus Spring Packard, Dr. Lincoln, and former governor Robert Pinckney Dunlap helped carry her coffin to Pine Grove Cemetery, where she lays today.

*Phebe had a brother and sister, Peggy and John.

Many thanks to the indispensable Barbara Desmarais for sharing her Phebe expertise with me!
Posted by Rebecca Roche at 10:50 AM