The cemetery lot just past the grave of Alpheus Spring Packard belongs to the family of Joshua L. Chamberlain. Chamberlain’s grave is undoubtedly the most famous (and the most visited) grave in Pine Grove. People from all over the globe travel here to pay their respects to the Civil War hero, and often leave a memento behind. Pennies, which bear the silhouette of the “Great Emancipator” Abraham Lincoln, are often left on Chamberlain’s grave in appreciation of his heroism. 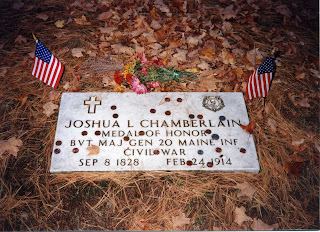 Chamberlain's footstone in October 1994, covered with pennies. This footstone was added long after Chamberlain's death to commemorate his Medal of Honor.
Much more has been written about Chamberlain’s life than can ever be covered in a blog post, but here is a brief biography. Chamberlain was born in Brewer, Maine on September 8, 1828. He attended Bowdoin College and served as the choir conductor of the First Parish Church, where he met the pastor’s adopted daughter, Frances “Fanny” Caroline Adams. The two courted while Chamberlain graduated from Bowdoin in 1852 and then studied at the Bangor Theological Seminary. In 1855, after completing his studies, Chamberlain and Fanny were married at the First Parish Church on December 7th. He and Fanny would have 5 children, though only Grace (“Daisy”) and Harold would survive to adulthood. While living in what is now a museum dedicated to him, Chamberlain took a position as professor of rhetoric and oratory at Bowdoin in 1856. 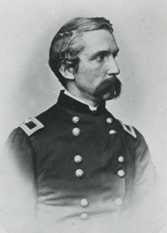 In August of 1862 he became Lt. Colonel of the 20th Maine Infantry and in July 1863 famously fought and defended Little Round Top at the Battle of Gettysburg—actions for which he received the Medal of Honor 30 years later. Due to his bravery in the Civil War, Chamberlain was made a Major General. After returning home, he became Governor of Maine for 4 consecutive 1-year terms. Interestingly, Chamberlain and the other Maine governor buried in Pine Grove (Robert P. Dunlap) both served a record 4 terms, exceeded only by Albion K. Parris’ 5 terms as Maine governor. After his governorship, Chamberlain served as president of Bowdoin College from 1871 to 1883. In 1900 he was appointed by President William McKinley as the Surveyor of Customs for the port of Portland. He died in his Portland home at age 85 on February 24, 1914, just after 9:30 am with his beloved daughter by his side.
Chamberlain is often referred to as the last person to die of wounds inflicted during the Civil War. Chamberlain was severely wounded at the Siege of Petersburg on June 18, 1864—so badly so that many (including Chamberlain himself, who wrote a deeply moving “goodbye” letter to Fanny from what he thought was his deathbed) believed he would die. He did recover, but the wound plagued him for the rest of his life. Not long before his death, he contracted a cold which local newspapers cite as aggravating his condition. 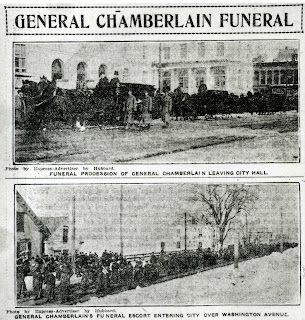 Because he died in Portland, Chamberlain received two funerals. The first was held at the Portland City Hall on Friday, February 27 at 10 am and attended by 2,000-5,000 people (accounts differ). After a brief service “in accordance with the well-known principles of Gen. Chamberlain who hated all ostentation” (Portland Daily Press, 26 February 1914), Chamberlain’s body lay in state for a period, his sword resting on the coffin, and then a military escort brought the flag-draped casket to the train station. Ralph Owen Brewster served as an usher during the Portland service and among the pallbearers was Chamberlain’s long-time doctor & friend Abner O. Shaw, who tended Chamberlain’s Petersburg wound during the battle.
When Chamberlain’s body arrived in Brunswick on a special train the next day, the entire Bowdoin student body escorted it to the First Parish Church. When they arrived, the Bowdoin students went into the church first, followed by members of the local GAR post, who “formed an aisle thru which the flag-draped casket was carried” (Lewiston Evening Journal, 29 February 1914). Out of respect for the dead, Brunswick businesses closed and Bowdoin cancelled all classes and events. During the service, Sue Winchell played a cell solo of “If With All Your Hearts” and “Largo” and Inez Perry Turner sang “Abide With Me” and “Nearer My God to Thee.” Bowdoin President William DeWitt Hyde delivered the eulogy, at one point quoting Chamberlain’s famous words spoken at the dedication of the 20th Maine monument at Gettysburg: “In great deeds, something abides. On great fields something stays. Forms change and pass; bodies disappear; but spirits linger…” 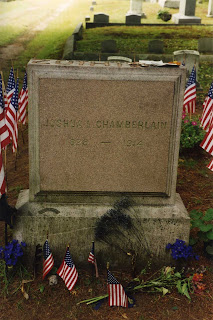 Chamberlain had requested a simple gravestone, which bears only his name and the years of his birth and death. Note that the pennies on top of this grave have been arranged to spell out "20th", the famous Maine regiment Chamberlain led.
Chamberlain historian Alice Trulock describes the events as the procession left the church for Chamberlain's final resting place: "The casket was then borne from the church to the sound of the organ playing Chopin's 'Funeral March.' Out the Bath Road the great, sad procession wended its way easterly the short distance to Pine Grove Cemetery. There the mourners stood with uncovered heads as the National Guard escort fired a suite of three volleys. Then the body of Maine's great hero was consigned to the earth a few yards from a stand of stately pine trees behind Bowdoin College." (Trulock, 379).