Most people who visit the Pine Grove Cemetery do so to see the grave of Civil War hero Joshua L. Chamberlain, and they end up walking right by the grave of Rev. Joseph McKeen. McKeen’s grave, which is inscribed entirely in Latin, is certainly a tougher read than Chamberlain’s. But both men were veterans, and both were presidents of Bowdoin College—and both have interesting stories to be told. 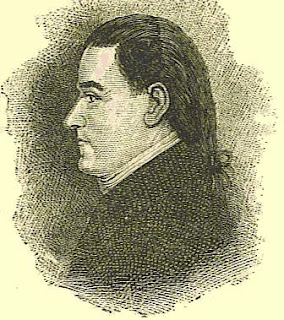 Engraving of Rev. Joseph McKeen, from Wheeler & Wheeler's History of Brunswick
Reverend Joseph McKeen was born in Londonderry, New Hampshire on October 15, 1757. He earned three degrees from Dartmouth College over a period of 30 years—a Bachelor of Arts in 1774, a Master of Arts in 1777 and a (honorary) Doctor of Divinity in 1804. McKeen opened a school in his hometown at which he taught for eight years before studying divinity, after which he then returned to teaching at Philips Academy in Andover, Massachusetts. In August of 1778 he served 25 days in Gale’s New Hampshire Regiment as a sergeant during the Revolutionary War, and probably participated in the events leading up to the Battle of Rhode Island. 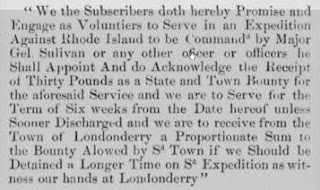 Transcription of the agreement signed by members of Gale's Regiment when they enlisted
McKeen’s longest term of employment, however, was as a Congregational preacher in Beverly, Massachusetts. Ordained on May 11, 1785, McKeen spent the next 17 years of his life in Beverly, marrying Alice Anderson and together raising their family of three sons and two daughters (several of his children will be featured in posts of their own on this blog later on). McKeen was passionate about his Congregational roots—he once referred to Maine’s itinerant Baptist and Methodist preachers “illiterate vagrants who understood neither what they say nor whereof they affirm” (quoted in Kirkland, 32).

In 1802, the young college in Brunswick, Maine was able to lure McKeen north, and he was inducted as the college’s first president on September 2. Bowdoin College was then a very small school—there were but eight students and one professor. There was also only one building, Massachusetts Hall, where McKeen and his family lived with the students. To call the students together, McKeen would simply tap his cane on the banister.

According to college historian Louis C. Hatch, McKeen’s early Bowdoin students were certainly no less rambunctious than they are today. McKeen and the professors would act as “detective-policemen” (Hatch, 25) and punish students caught doing everything from unnecessarily riding on a Sunday (for a fine of $1), to playing cards, to stealing & butchering a Brunswick resident’s geese, owning and using firearms & fireworks and lighting bonfires. Even future Maine governor Robert P. Dunlap (who is also buried in Pine Grove) was punished for skipping chapel. McKeen, who also taught mathematics at the college, conferred the first six Bowdoin graduates with their degrees. 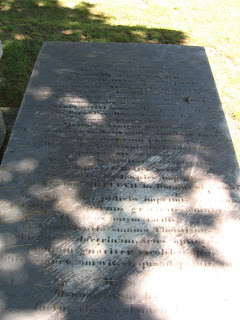 McKeen's grave as it appears today. An English translation of the Latin transcription can be read here (this source mistakenly translated his birth year as 1742).


But a long presidency was not in the cards for McKeen. Afflicted with what was then called “dropsy”, which was probably edema due to congestive heart failure, McKeen died in Brunswick on July 15, 1807, after serving the college nearly 5 years. Bowdoin College contributed $300 (approximately $4,500 today) to McKeen’s family to help cover his burial and $100 to pay for a “table tombstone of white and Egyptian marble” (Flanagan, 14). The college also paid for the monument’s repairs in 1829 and 1842.