Below are three transcribed newspaper articles: Fanny Chamberlain’s obituary, an article about her funeral, and the beautiful eulogy given by Rev. E.B. Mason at her service.

Fanny Chamberlain’s obituary, as printed in the
October 20, 1905 issue of The Brunswick Record
DEATH OF MRS. CHAMBERLAIN
Mrs. Frances (Adams) Chamberlain, wife of Gen. Joshua L. Chamberlain, passed away on Wednesday night at her home in this town. She was about 80 years of age. They had been looking forward to the celebration of their golden wedding in December next. She was the daughter of Asher Adams, one of the old Boston merchants, and Amelia Wyllys of Hartford, Conn., whose home was the old Wyllys mansion of Charter Oaks fame. She was a lineal descendant of Mabel Harlakenden, known as “the Princess of New England,” being in fact of the blood royal. She was a member of the family, regarded as an adopted daughter, of her cousin, Rev. Dr. George E. Adams, pastor of the First Parish church in Brunswick. She was a rare and gifted woman, and had opportunities in life to be active in wide and varied spheres. During her husband’s governorship of Maine and presidency of Bowdoin College, her generous hospitalities and especially her personal interest of a large number of young men, students of the college, she endeared herself to many who cherish the memory with grateful affection. Mrs. Chamberlain lost her eye-sight several years ago, and has since suffered very greatly from a combination of diseases, which she had borne with admirable patience. She will be widely missed and deeply mourned. She leaves a son, Harold Wyllys Chamberlain of Brunswick, and a daughter, Mrs. Horace G. Allen of Boston.
Funeral services will be held on Saturday at 2:30 p.m., at her late home on Maine street. 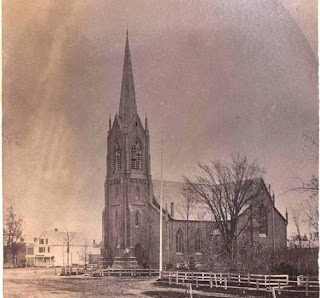 Photo of the First Parish Church, taken during the brief period between 1848 and 1866 when the church had a spire. The spire was blown off in a windstorm and fell onto Maine Street--no one was injured. From the Pejepscot Historical Society, acc# 2008.383.3.b.


Description of Fanny’s funeral, from the
October 23, 1905 Lewiston Daily Evening Journal
TRIBUTES TO MRS. CHAMBERLAIN, BRUNSWICK, ME., Oct. 24 (Special).—Saturday the funeral of Mrs. J.L. Chamberlain was held in Brunswick. Only family and intimate friends attended the prayers at the house at half after two in the afternoon.
From the home the remains were carried to the Congregational church where the funeral service was held. The officiating clergymen was Dr. Mason, who was a pastor of the college church for over forty years and he was assisted by the present pastor, Rev. Mr. Jump, who offered the opening and closing prayers.
“Sun of My Soul,” one of Mrs. Chamberlain’s favorite songs, was given at the beginning of the service, and at the close the organist played magnificently, “The Land of the Leal.”
Mrs. Chamberlain passed away on Wednesday night. Only the Sunday previous she went for a drive. On Monday it was noticed that she wad suffering from a cold and on Tuesday she was much worse. This hastened her death, the indirect cause of which, no doubt, was the injury to her hip, received last August as the result of a fall.
Besides her husband, Mrs. Chamberlain is survived by two children, Mrs. Horace Allen of Boston and Mr. Harold Wyllys Chamberlain of Brunswick and three littler grand-children, all the daughters of Mrs. Allen.
Mrs. Chamberlain, who was seventy-seven years of age [sic; she was actually 80], has been totally blind for the past five years and for several years previous to that, was partially blind. Her husband and son have been especially devoted to her during her years of affliction. Even after her blindness Mrs. Chamberlain played beautifully upon the piano and not only from memory for she also improvised.
In speaking of her a friends said: “Mrs. Chamberlain had a fund of funny stories and of quaint sayings. She was young and bright in spirit, even to her last. She was cultured and intellectual and an artist in painting as well as in music. But better than all her versatile talents was her dear, true strong, loving heart.”
One of her dearest friends spoke to the Journal reporter of Mrs. Chamberlain’s wonderful faculty of entertaining a large company of people easily and with no apparent effort, making everyone feel that he was a part of the happy circle.
It will be remembered that Mrs. Chamberlain, who was formerly Miss Fannie Adams, was adopted by her father’s brother, Dr. Adams of Brunswick, when but a child. The officiating clergyman at the funeral services told the story of her life in a series of word pictures, the first of which described the beautiful little girl with her great, observant brown eyes, as she came up the aisle of the old white church, on the first Sunday after the adoption by Dr. and Mrs. Adams.
He carried her through her girlhood to young womanhood when she had the care of the singing in the church and played the organ for eight years. Then he told how she became interested in a young man in the college and later gave her heart to him and the scene of her marriage which was solemnized by her adopted father, was pictures. Then he described her as a mother and never, said he, was there a more devoted mother than she. Then he pictures the time when her husband was made governor of the State and “this same little Fannie Adams” performed the duties she was called upon to perform with such marked ability and acceptability.
Then to the time Mr. Chamberlain was made president of Bowdoin College when she was still “the same little Fannie Adams,” and the students came to her with their joys and sorrows, wrong doings and love affairs. Whatever happened, she always took the part of the student, being almost a mother to them.
Then he told of her blindness when he came with faltering step up the aisle of the church, leaning upon the arm of her husband and followed by her son, and then, sweetest of all, of her last years. 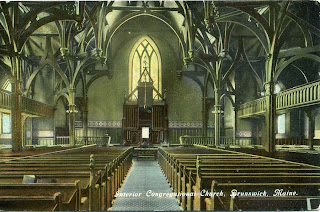 Colored postcard showing the interior of the First Parish Church. The Chamberlain family sat in pew #64. From the Pejepscot Historical Society, acc# 1982.97.418.6.