The Other Woman: Elizabeth C. Edmunds 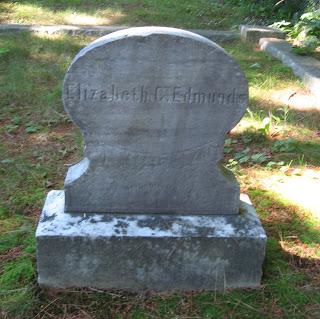 The simple headstone of Elizabeth C. Edmunds, located on the western side of the Chamberlain family plot in Pine Grove.
Just as Grant is buried in his tomb, the Chamberlain family is buried in the Chamberlain plot at Pine Grove Cemetery. Visitors are able to see Joshua Chamberlain's two gravestones, Fanny's, and the stones of their children: Grace, Harold, Emily & Gertrude. But there is one more gravestone in the plot, a small stone that bears only the name "Elizabeth C. Edmunds".
Who was Elizabeth Edmunds? What we know is that she was born in 1845 in Ontario, Canada to farmers Asahel Edmunds and Harriet Wakefield. At the time of her death in August 1896, at the age of 50 years 3 months, she was working as an artist. Interestingly, her death certificate indicates that she was buried in St. John Cemetery, just up Bath Road from Pine Grove Cemetery.
But the more pressing question is why is Elizabeth Edmunds buried in the Chamberlain plot? The short answer is nepotism. Elizabeth was the sister of Lillian Edmunds, who was Joshua L. Chamberlain's secretary. Lillian, who was actually a distant relative of Fanny's, later became Fanny's personal companion. During the last few years of Fanny's life, Lillian took care of her; the pair would even travel to Portland for shopping excursions. During this time, Joshua referred to Lillian as "a blessing to all" (J.L. Chamberlain, quoted in Smith, 302). After Fanny's 1905 death she became Joshua's housekeeper, and, as he grew older, his nurse at the Portland home where he spent the last years of his life.
In his will, Chamberlain left a space for Lillian to be buried in Pine Grove Cemetery. She apparently never took him up on the offer, but her sister Elizabeth will spend eternity with the Chamberlains, forever puzzling visitors.