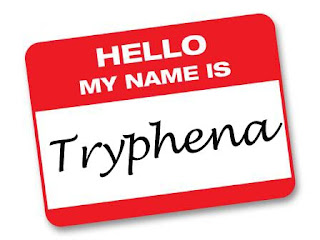 Have you ever walked around an old New England graveyard? If you have, you may have noticed that some of the names used back then are very uncommon today—you just don’t meet many Ephraims or Ebenezers these days.

New England, more than any other region of America, relied on the Bible as the source of names. In his ridiculously thorough book Albion’s Seed: Four British Folkways in America, David Hackett Fischer discusses this phenomenon. By his count, “In seventeenth-century Boston, 90 percent of all first names were taken from the Bible; in Concord, 91 percent; in Hingham, 95 percent. That proportion was nearly twice as great as in non-Puritan colonies” (Fischer, 94).

Though Fischer does not look specifically at the naming practices here in Maine, a tour though Pine Grove Cemetery suggests that the same traditions were used here. Though there are no people named Mahershalalhasbaz—the longest name in the Bible—plenty of Biblical names appear on the gravestones here. I’ve already mentioned Alpheus S. Packard—In the Bible, Alpheus was the father of 3 of the 12 apostles. Among some of the simpler Biblical names appearing in Pine Grove are Israel, Magdalene, and Nahum (a Biblical prophet), but they certainly get more complicated. There is an Erastus, an Abiah, a Thirza, a Tryphena, a Huldah, an Abiezer, a Mehitable and at least two Beulahs.

Fischer also mentions that there is some evidence to suggest New England parents “sometimes shut their eyes, opened the good book and pointed to a word at random” to come up with their child’s name (Fischer, 94). This may explain how Pine Grove residents Experience, Thankful, Charity, Prudence and Mindwell got their names.

Fischer goes on to describe how necronyms, the practice of using the names of the dead, was another common New England practice: “When New England families lost a child, its name was used again in 80 percent of all cases where another baby of the same sex was born” (96). Apparently, this practice is still going on today. One of our faithful volunteers here at the Pejepscot Historical Society, who used to work at the Town Clerk’s office, recalls when a gentleman—“Dave”—came in requesting a copy of his birth certificate. She took Dave’s name and the names of his parents and pulled the birth certificate from the files. When Dave saw the birth certificate, he noticed that the date of birth was incorrect. After some research, our volunteer discovered that Dave had an older brother who had died before Dave’s birth, and Dave’s parents had simply reused the name when he came along—the birth certificate she had pulled belonged to a sibling he didn’t even know he had.

An exhaustive list of Biblical names can be found here.
Posted by Rebecca Roche at 10:53 AM