The seventh president of Bowdoin College, William DeWitt Hyde, was born in Winchendon, Massachusetts on September 23, 1858. His parents were Eliza DeWitt and Joel Hyde, who was described by Hyde’s biographer as half farmer and half industrialist. Whatever Joel was, he must have done alright by his family. William attended Exeter Academy and then Harvard, where he helped found the Harvard Philosophical Society, graduating in the class of 1879. Hyde decided to pursue religion as a career, and graduated from Andover Theological Seminary in 1882. He had no way of knowing that his list of accolades would eventually contain honorary degrees from Bowdoin, Harvard, Syracuse and Dartmouth. 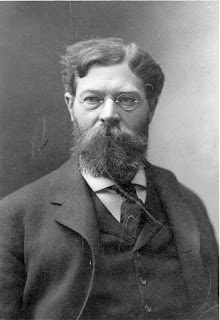 William DeWitt Hyde, the seventh president of Bowdoin College, photographed circa 1910. From the Pejepscot Historical Society, acc# 1992.42.3.
While studying at Andover, Hyde met Prudence Phillips, the daughter of a New York City grain merchant. After he graduated from seminary in 1882 and became ordained in September of 1883, Hyde took the position of pastor at the Paterson, New Jersey Congregational church. On November 6 of the same year he married Prudence. The couple would eventually have three children: William & Elizabeth, a set of twins who died at age 2 weeks, and George, who became a lawyer.

Not two years after taking this job, however, Hyde was lured away from New Jersey for a greater challenge. Bowdoin College had been searching for a new president for 2 years after the resignation of Joshua L. Chamberlain. Though individuals like Alpheus Spring Packard had served in the interim, the college desperately needed someone more permanent. Egbert C. Smyth, a Bowdoin trustee and the son of William Smyth, began to petition that Hyde be hired not only for the presidency, but also as the new professor of mental & moral philosophy. Smyth was ultimately successful, and Hyde became the college’s youngest president before he had turned 27.

Despite his age, Hyde had shown great promise and had excellent recommendations. And, luckily for him, he lived up to the hype. Hyde reinvigorated and revived Bowdoin, taking, as Charles C. Calhoun described it, “the disadvantages of the old-fashioned college—its small size, rural isolation, tradition of piety, and fondness for professors who taught by force of personality more than by intellectual example—and turned them into virtues” (Calhoun, 197). By his tenth year in office, “the boy president”, as Hyde was called, had doubled the college’s enrollment (Burnett, 111). It was during his stead that Whittier Field, Hubbard Hall, the Walker Art Building and Searles Science Building were all constructed. Hyde raised professor’s salaries and made major changes to the curriculum as well, dropping Greek and Latin as requirements for graduation. 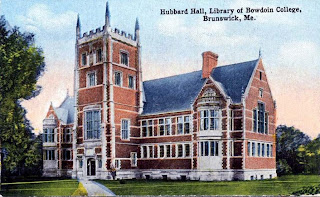 A postcard image of Hubbard Hall, the college's library until 1965, when the Hawthrone-Longfellow Library was completed. A portion of Hubbard Hall is now used as the Peary-MacMillan Arctic Museum. From the Pejepscot Historical Society, acc# 1982.97.298.6.
At the age of just 49, Hyde suffered what his biographer Charles T. Burnett called a nervous breakdown. Hyde suffered from fainting spells and examinations suggested he had a weakened heart (Hyde, ironically the head of the only medical school in Maine, hated physicians). He took a leave of absence and traveled to Europe for a period, but appears to never have fully recovered.

William DeWitt Hyde died on the morning of June 28, 1917 at age 58. His last words, said to his wife Prudence, were reportedly “Don’t worry, don’t worry about anything” (Burnett, 340). On July 4, 1917, the Boston Herald published an article by John Clair Minot, a former student of Hyde’s, titled “The Burial of a Great Teacher”. Minot described Hyde’s burial in a grave just past

“After Mr. [Thompson Eldridge] Ashby had read the committal service, in a flower-bordered grave in the shade of a little tree of thick foliage we left the sleeping teacher. Close by sleep four others of the seven men* who have been at the head of Bowdoin since it was chartered in 1794, and several of those who have been loyal associated on the faculty. No lovelier setting could be imagined—the sunshine flooding the cemetery, the whispering pines thick around it, one little bird singing in a tree near by, and the hushed and uncovered groups in whose hearts the sense of loss was mastered by a proud memory of what had been and an unfaltering belief in what survives” (Minot, quoted in Burnett, 341-342).

When Hyde became president of Bowdoin College, there were only 119 students enrolled, but by the time of his death, there were nearly 500. Though his life was short, William DeWitt Hyde left a lasting impression on Bowdoin College, helping to transforming the school into the success it is today. 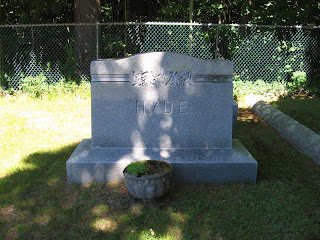