In the library on the second floor of the Skolfield-Whittier House, hanging on a wall above the fireplace, is a shadow box. It contains a horseshoe-shaped wreath. As you get closer to it, you see that the wreath is composed of many small flowers—some gold, some white, some brown, and others silver. But this wreath isn’t made of flowers—it is made of human hair. 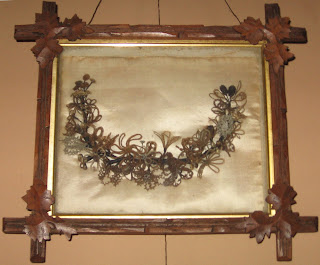 Hair wreath on display at the Skolfield-Whittier House,
probably made by Eugenie Skolfield Whittier or her sister Augusta Marie Skolfield.
Hair wreaths, which were primarily created between 1850 and 1880, were made by Victorian women. These women tended to be middle and upper-class, as they had more time on their hands than did their lower-class counterparts to make crafts. Usually, hair wreaths took the same shape as the one at the museum—that of a horseshoe. And, just like horseshoes, these wreaths were also hung with the open top facing up, facing heavenward. 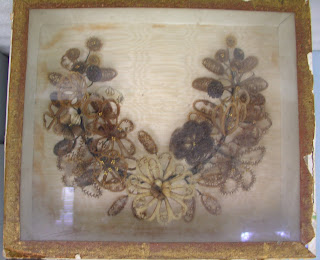 Hair wreath made by famed botanist Kate Furbish, who is buried in Pine Grove Cemetery. From the Pejepscot Historical Society collection, acc# 1992.75.19.
Why was it important that these wreaths faced heavenward? Often, hair wreaths were created as memorials to the dead. When someone in a family died, some of their hair was collected and incorporated into the hair wreath. To make a wreath, Victorian women would start with a simply wire, horseshoe-shaped frame. Next, they would wrap the deceased’s hair around a piece of thin wire, and then shape the wire into flowers. Sometimes they would cut the hair to create tufts, simulating flower petals. Magazines like Godey’s Lady Book printed instructions on how to create these wreaths.

The first flowers to be added to the metal frame would be at the bottom, center. When another member of the family died, the older flowers would be moved up and outward, while the newer hair would take its place in the bottom center position. But hair wreaths were not always made as memorials to the dead. Sometimes, hair was collected from entire schools, churches or communities and woven into one wreath. Because hair wreaths were usually a personal celebration of a family or other group there is little evidence that they were ever created for commercial or solely decorative purposes. 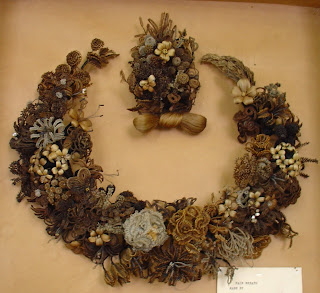 A particularly elaborate hair wreath, made by Mrs. Clara B. Kennedy in 1868. From the Pejepscot Historical Society collection, acc# OH 186.
Indeed, hair was often used as a deeply personal memento of a loved one who had passed away, but it was not exclusively used in hair wreaths. In the time before photographs were widely available or affordable, hair allowed people to carry a piece of a friend or family member around with them. Often, this hair was woven into jewelry, such as bracelets or brooches, and was often worn during the mourning period following a death in the family. Yet hair was not used exclusively by those in mourning. Victorian women often had a hair receiver on their dressing table, in which they would deposit the loose strands from their hairbrush. This hair was then used to fill pincushions—the pins would be coated with the natural oil from the hair, allowing them to move through fabric much easier. 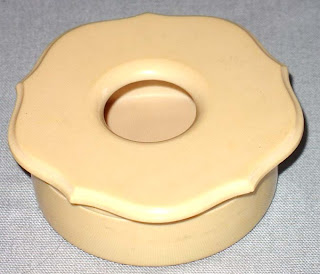 A hair receiver, from the Pejepscot Historical Society collection, acc# 1978.79.
In Victorian America, women utilized their own creativity to create elaborate and beautiful memorials to loved ones using hair. Today, hair wreaths live on as elaborate creations produced from one of the simplest mediums.
Sources:
Green, Harvey. The Light of the Home: An Intimate View of the Lives of Women in Victorian America. New York: Pantheon Books, 1983.
Hair Art: Jewelry to Be Worn Close to the Heart website.
Harran, Susan & Jim. “Remembering a Loved One With Mourning Jewelery”. Antique Week, December 1997.
Rombeck, Terry. “Museum Tangled in History of Hair”. LJWorld.com website, 9 October 2005.
Posted by Rebecca Roche at 11:02 AM