Looking at the statistics, it is no surprise that during the Victorian* era, women were more associated with death than men. In every single year of the Victorian era in America, the majority of women did not live long enough to see all their children grow up. In fact, it was not until 1920 when more than half of women were able to complete what we now consider a normal life cycle. Thanks primarily to the dangers of childbirth, in 1830 less than a quarter of the women in the U.S. lived long enough to see their children grow up (Green, 166). Women became associated with death not only because it seemed to target them more than men, but also because of their spiritual, emotional and domestic roles in society. 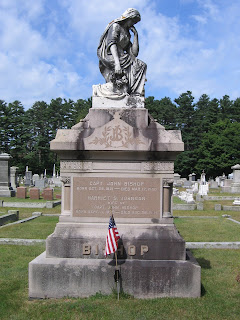 A statue of a mourning woman sits atop the monument to Captain John and Harriet S. Johnson Bishop in Pine Grove Cemetery. This grave is located near the front of the ninth row from the right.
Since colonial America, women have made up the bulk of churchgoers. By the 1870s--though priests and pastors and reverends were all men--women were the ones filling the pews and "engag[ing] in religious introspection" (Corbett, 165). Additionally, religious rhetoric increasingly posed the commercial against the religious. Because men (who held jobs as bankers and businessmen) embodied the commercial, it is no surprise that women, almost by default, became the symbol of religion. Because death was such a religious issue, the more women became associated with religion, they more they became associated with death.

In addition to religion, women were associated with emotions. Women were the major consumers of romantic and emotional literature (Corbett, 165). Because death was, and of course still is, a very emotional experience, women once again were connected to death. This association even affected mourning art. As we have already seen, mourning scenes commonly featured weeping women. In Pine Grove Cemetery, statuary featuring mourning women are among the most striking funerary art found there. 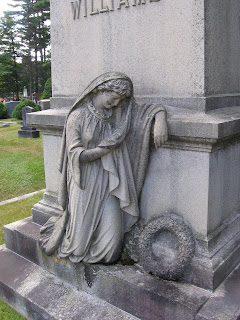 Another statue of a mourning woman in Pine Grove Cemetery. This gorgeous example is at the monument dedicated to the Williams family, located near the end of the ninth row from the right.
Victorian American women were also defined by their domesticity. A stroll through any old cemetery can reveal this. As Katharine T. Corbett points out, the graves of women refer to them as "wife of" and "mother of", whereas their male children and husbands were rarely identified in relation to women, such as "husband of" or "son of". Though the epitaphs of men would praise their business acumen, bravery or accomplishments, those of women focused on their domestic skills, labeling them good, kind mothers and wives.

But how does this female cult of domesticity relate to death? Long before the advent of funeral parlors, death was very much a domestic issue. When a loved one died, their body was cleaned, dressed and prepared by the family. The funeral itself usually took place at home, not in a church or funeral home. For example, after the 1895 death of prominent Brunswick resident Alfred Skolfield (of the Skolfield-Whittier House) the family held his funeral in the formal parlor of their home. It was not until late in the 1800s that the utilization of a funeral parlor became common among the bereaved. 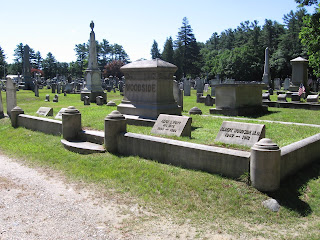 The Woodside family plot, located in Pine Grove Cemetery in the front of the second row from the right.
In her article titled "Called Home: Finding Women's History in Nineteenth-Century Cemeteries", Katharine T. Corbett argues that women's domestic roles extended into death. After all, she points out, what are cemeteries but "cities of the dead", filled with family plots that are arranged like houses upon a street? The Woodside family plot pictured above serves as an excellent example of the similarities between the home and the family cemetery plot. There are "walls" marking the edge of the plot--there are even front steps leading into it, just as there are front steps leading to a home. In both life and death, women found their role to be situated in the home.


*The Victorian era is defined as lasting from 1837 to 1901, when the Queen for whom the era is named ruled England.