In a blog post last month, I explored the many things the epitaphs of Pine Grove Cemetery can teach us about the lives, careers, families and--of course--deaths of those buried there. But there is more to be read into these epitaphs than what they tell us about the deceased--they also tell us about the culture in which they were produced.
One trend visible in these epitaphs indicates the process of the sentimentalization of death which I discussed in an earlier blog post about mourning scenes. The wife of James H. Alexander--who died on February 10, 1866 at the age of 29--had inscribed on her husband's gravestone:


"In memory of my husband
Earth has but one dear spot for me
And that is my husband's arms."


This romantic idea of death can be seen in the epitaph of another man who died in 1866, Algernon Hinkson. Hinkson was actually the widower of Julia Dennison (1826-1848), but he remarried after Julia's death and is buried next to his second wife, Sarah. When Hinkson died on July 15 at the age of 40, his family ordered a stone which reads:


"We have tearfully folded his cold white hands
Lovingly over his breast;
We have kissed the pale lips forevermore dead
And laid him down gently to rest."


In addition to these sentimental epitaphs, there are many traditional religious verses and quotations found on Pine Grove gravestones. For example, Francis Owen's grave (she died on May 21, 1865 at the age of 46) bears the simple epitaph "The Lord is my Shepherd." An interesting parallel can be seen in the use of religious themes in both the home and the graveyard. In his book Death in the Dining Room and Other Tales of Victorian Culture, Kenneth L. Ames notes that embroidered mottoes/needlepoint and epitaphs had much in common: "These texts echo some of the same sentiments, the same rhythms--and sometimes even the same words--thus linking house and cemetery, life and death, earthly home and heavenly home." (134) An excellent example of this can be found with the grave of Lida Williams Stone Holmes (1842-1897), whose gravestone reads "Simply to thy cross I cling." The same phrase can be found on a needlepoint at the Woolwich Historical Society. 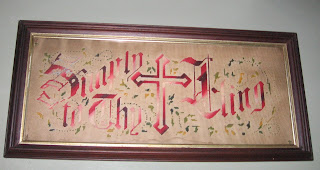 Embroidered motto reading "Simply to thy [cross] I cling." From the Woolwich Historical Society, Woolwich, Maine.
The comparison of human lives as plants is another theme one can see in the epitaphs at Pine Grove, particularly among the young. Addison F. Swett died on January 19, 1847 at the age of 6 years, 6 months. On his tombstone is the epitaph "A lovely flower transplanted to richer sod and warmer climate." This idea of death as God "replanting" a soul from Earth into heaven is not isolated to the epitaph of one Pine Grove youth. Robert S. Skolfield (died October 5, 1872) lived only to be 6 months, 17 days old. His epitaph reads: "A bud snatched from earth, to blossom in heaven." But this idea of "replanting" is no more poetically put than in the epitaph of Sarah Hinkley, who died at the age of 3 years, 8 months, 21 days:


"The dearest rose begins to bloom,
and sheds its fragrance round.
The gardener gently takes it home
To thrive in richer ground."

Special thanks to the Woolwich Historical Society!
Posted by Rebecca Roche at 7:26 AM