The woman who would permanently change the Brunswick library was born in town on July 11, 1865 to Charles J. Gilman (1824-1901) and Alice McKeen Dunlap (1827-1905). Mary G. Gilman had a lot to live up to in her parents. Her mother was a granddaughter of Rev. Joseph McKeen, the first president of Bowdoin College, and her father served as a U.S. Representative. Considering all this, it is no surprise that Mary later developed a keen interest and passion for history. 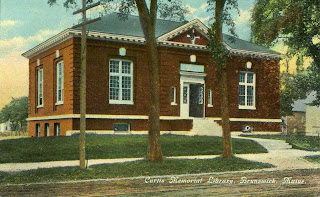 A colored postcard of the Curtis Memorial Library, circa 1925. From the Pejepscot Historical Society, acc# 1984.45.f.
Mary appears to have been a very bright girl, graduating from Brunswick High School in 1884. After this, she studied to become a librarian under Professor George T. Little at the Bowdoin College Library. At Bowdoin, Mary learned the essentials of librarianship, including cataloging skills. After the first librarian of the Brunswick Public Library, Lyman Smith, decided to move on in 1895, Mary was hired to replace him with a starting salary of $6 per week. Almost immediately, Mary went to work transforming the library into a thriving local resource. 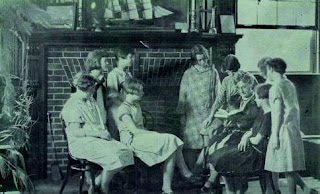 Mary G. Gilman (seated on the right, holding a book) reading to the Wildflower Club, a group of local children. Photograph from Helmreich's A History of the Public Library in Brunswick, Maine.
Among Mary's many innovative ideas for the library were those focused on teachers and children. She encouraged local teachers to utilize the library's resources and even established a separate department within the library for education. For children, she had a completely new room created within the library, which became extremely popular with the local youth.

But Mary Gilman did not stop at teachers and children--she wanted the library to be accessible to all Brunswick residents. She took out books on travel, history and essays and placed them on a librarian's table so visitors would have easy access to them. She also created a "traveling library", where batches of 50 books at a time were sent to outlying areas of Brunswick (like Mere Point). This way, those who could not or did not go into town often had a chance to check out a book. For the same reason, she opened up the library late on Saturdays, so that those who did live far out had plenty of time to get to the library. And responding to the increase in Franco-Americans in the area, Mary also had several hundred books in French purchased for the library.

But Mary Gilman had passions outside of her beloved library. She was a member of the First Parish Church and secretary of the Pejepscot Historical Society. As the "last surviving member of one of the town's oldest families", Mary had a true passion for history ("Miss Gilman, Last of Family, Dies"). Many letters, to and from Gilman, in the collection of the Pejepscot Historical Society attest to this fact. Mary was always eager to research the questions of locals and visitors alike. Louise R. Helmreich's book A History of the Public Library in Brunswick, Maine relates a story about what happened when Gilman heard that a Brunswick High School reading list recommended Gone With The Wind as a historical novel. Gilman apparently thought the book inappropriate for high schoolers, and the book was removed from the reading list after she had "a very definite conversation with the Principal."(Helmreich, 45) 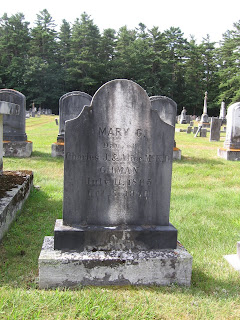 The grave of Mary G. Gilman, located in third row from the right. Gilman died on October 7, 1940 "after a short illness" at her home at 14 Union Street ("Miss Gilman, Last of Family, Dies"). She was 75 years old.


Mary G. Gilman managed the Brunswick Public Library during some of the organization's most important years. During her tenure from 1895 to 1940, she oversaw the library change names from the Brunswick Public Library to Curtis Memorial Library in 1904; personally instituted the Dewey Decimal system in 1936; and watched as her hard work took a one-room library in the town hall building and move it to a building of its own on Pleasant Street. It is not surprising, then, that in her history of the library Louise Helmreich states that "Many individuals through the years had helped to make the Brunswick library a part of the community. None have contributed more to this end than Miss Mary Gilman. She was not only herself a vital part of the library, but she made the library a vital part of the town." (47)