Reprinted below is the first portion of the obituary of Barrett Potter from the August 26, 1926 issue of The Brunswick Record. I have contributed additional information in brackets throughout.
"DEATH OF HONORABLE BARRETT POTTER
"Distinguished Attorney Passes Away at Home Thursday Night

"Had Represented Town in Legislature, Served as State Senator, Was Secretary of Bowdoin College Trustees, and Head of Two Banks in Town. Wisdom and Learning Recognized by Prominent Men.
"Hon. Barrett Potter, able attorney, leader in town affairs, a man, whose wisdom and sound judgment has for many years been recognized in business and political circles throughout the State, died at his home on Maine street Thursday night, after a brief illness, following a heart attack. Mr. Potter was born in Readfield April 19, 1857, the son of Rev. Daniel F. Potter. His father was graduated from Bowdoin in ’41. His mother was before her marriage, Miss A.[lvina] A. Cram of Mt. Vernon.

"He is survived by two sisters, Miss Caroline Potter and Miss May Potter, both of Brunswick. [None of the siblings, Barrett included, ever married. They lived together at their 240 Maine Street home, built for them by John Calvin Stevens from 1893-1894.] 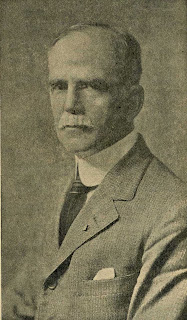 Photo of Barrett Potter which was printed with his obituary in the August 26, 1926 issue of The Brunswick Record.
"After graduating from the Brunswick High school Mr. Potter finished preparatory studies at Phillips-Exeter Academy, entered Bowdoin College and was graduated in the class of 1878, receiving his A.B. degree in 1878 and his A.M. degree in 1881. He was a member of the Phi Beta Kappa, was managing editor of the Bowdoin Orient from 1876 to 1877 and the Bugle in 1878; received ex tempore Essay prize in 1877; 1st Essay prize in 1878; was class orator in 1878 and also salutatorian. He was appointed to deliver the English oration at commencement in 1881.

"He was a fine athlete and always took an interest in college sports. He has kept in touch with athletic affairs of his own college as well as of others and had a personal acquaintance with many of the athletic instructors in larger institutions. Mike Murphy, famous trainer of the University of Pennsylvania, was one of his personal friends.

"In the Spring following his graduation Mr. Potter became principal of Calais High school and held that position for three years, from 1879-1882. He was instructor in rhetoric and history at Bowdoin College from 1883 to 1885, at the same time pursuing his study of law with Weston Thompson. He was admitted to the Cumberland bar in 1886 and has since occupied an office in Brunswick.

[Barrett Potter was also a member of several Brunswick organizations. In addition to being a member of "The Club", he was also a charter member of the Pejepscot Historical Society, founded in 1888.]

"At the time of his death Mr. Potter was President of the Union National Bank and of the Brunswick Savings Institution.

"Mr. Potter had always been active in advocating the rights of the municipality. He was a notable case for the town in the suit of the Brunswick Gas Light Company vs. The Brunswick Village Corporation. The company alleged the destruction of its pipes in the streets when the sewer was laid. The case went to the Law court twice and the final decision was a victory for Mr. Potter who defended the village corporation.

"In the legislature Mr. Potter was a member of the judiciary committee and made a name for himself there by the able way in which he handled the Brunswick water bill and defended the interests of the town in the Bull Rock bridge matter. He took part in many of the more important measure brought before the House and gained the reputation of being one of the most convincing and forceful debaters in that body.

"While a State Senator the Augusta correspondent of the Lewiston Journal complimented him as follows: ‘Over in the Senate they like to hear Senator Barrett Potter of Brunswick. At once a joy and terror to the hearts of reporters is he, for he is easily the premier of the Senate spell binders. His methods are different from those of all the others. He stands up in his seat, seldom taking a step, usually with his glasses in his right hand and some paper or something like it in his left. Occasionally he varies this by resting the left hand on his desk throughout the entire speech, but this is seldom. Every gesture which he makes is with his right finger and every point appears to be made emphatic by those glasses. Mr. Potter is not a rapid speaker, though he is not slow. But he talks steadily and evenly. His speed is uniform from beginning to end. His voice is full, at the same time pleasant and his enunciation is perfect. It is in this respect that his is the joy of the reporters. There is not an easier speaker to report than Mr. Potter. But there is one thing about him which makes him the terror of these same newspaper men. It is the abundance of figures which he always has at his tongue’s end and which he is constantly using. They are what they dread, for no matter how carefully the speaker may utter them, there is more danger in getting twisted reporting two sets of numbers made in a speech than in handling five hundred words of ordinary matter.’

"On March 15, 1906, he wrote a letter to the Press Agent of the Maine Referendum League giving his reasons for voting against initiative and referendum. This letter was replied to by Senator E.S. Clark who was for the initiative and referendum. Both letters were published at the time. He later made an important speech in regard to the resolve in favor of a referendum. In 1907 he was called to address the committee on education on the University of Maine question as to whether the University should serve the economical needs of the State of not. Mr. Potter believed in the affirmative.

"Mr. Potter was a member of the Brunswick Golf club and was frequently seen on the links. In golf as in all matters of life he exhibited his good sportsmanship. He was a genial, likable companion, and while a man whose natural dignity of bearing tended to make him appear austere, he was found by those who enjoyed his acquaintanceship, to be most sociable and his courtesy was admirable indeed.

"Mr. Potter was always a staunch republican. His religious preferences were those of a Congregationalist and he was a member of the parish of the Congregational church [the First Parish Church]. 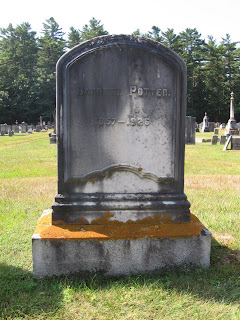 Barrett Potter's grave in Pine Grove Cemetery, located in the third row from the right.
"The funeral was held from the residence Sunday afternoon, very impressive service being conducted by Chauncey W. Goodrich, D.D., a former pastor of the First Congregational church. Interment was at Pine Grove cemetery. The bearers were Dr. Oscar Davies of Augusta, Hon. Frederick A. Fisher of Lowell, Mass., Hartley C. Baxter, Dr. Charles S.F. Lincoln, Thomas H. Riley, Robert D. Perry, G. Allen Howe and Samuel A. Melcher...[Barrett himself was actually a pallbearer at the funeral of Joshua L. Chamberlain in 1914.]"

Many thanks to Ann Frey, who helped research Barrett Potter for this project.