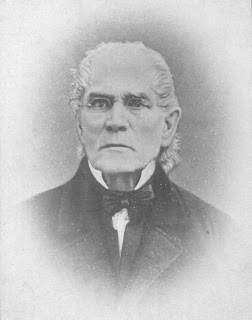 James Cary, Jr. photographed at the age of 72 in 1862. From the Pejepscot Historical Society, acc# OH 1726.15.b.
In 1805, when he was just 15 year old, James Jr. served as an apprentice to Robert Eastman in Belfast, Maine. With Eastman, and possibly another clock-maker named Bisbee, Cary learned the trade of making clocks. A year later, Eastman moved to Brunswick and there Cary later became his partner, forming the business Eastman & Cary. Wheeler & Wheeler states that in 1809, when Cary was just 19, he bought out Eastman's share of the business and owned the clock-making enterprise outright. Interestingly, at first Cary ran his Brunswick business out of the same house he was born in, at the corner of Maine and Mason Streets. He remained at this location even after the building burned down in 1853, rebuilding on the site and working there until his death in 1865. 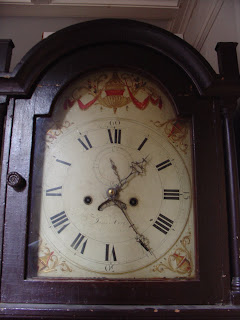 The face of a grandfather clock made by James Cary, now in the collection of the Pejepscot Historical Society (acc# OH 620). Above the number "6" on the dial you can see Cary's signature (click the photo to see a larger image).
On July 16, 1816, Cary married Mary Oakman, from Pittston, Maine. Around 1826 the couple had a house built at 11 Federal Street. Though Mary and James had 3 daughters and 2 sons together, only 2 daughters--Mary Ann & Hannah Elizabeth--survived to adulthood.

Outside of Brunswick, James Cary Jr.'s fame stemmed from one of his students--Aaron L. Dennison. In 1830, Dennison (1812-1895), the son of Col. Andrew Dennison, studied clock-making under Cary and was later extremely successful as a jeweler in Boston. Dennison invented machines to standardize the production of gears and introduced the idea of interchangeable parts to pocket watches, earning him the title "father of American mass-production watch-making." 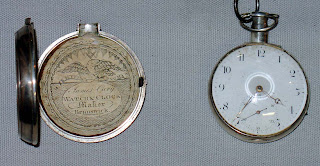 A pocket watch (right) and accompanying case (left) made by James Cary, Jr. from the Pejepscot Historical Society collection (acc# OH 729). Inside the watch case is James Cary's label--click the image for a larger view.
Cary, however, should not be defined by his role in Aaron Dennison's life. Indeed, Cary was one of Brunswick's most prominent citizens. In business, he never limited himself to clock-making, and also took on the titles gunsmith (like his father), goldsmith and silversmith. Cary even sold medicine out of his shop. He was also very involved in the local community, serving as a member of the local Masonic fraternity and as vice-president of both the Nucleus Club and the Brunswick & Topsham Athenaeum. Cary attended the First Parish Church with his wife and was, like many of his neighbors, at first a Whig and later a Republican. 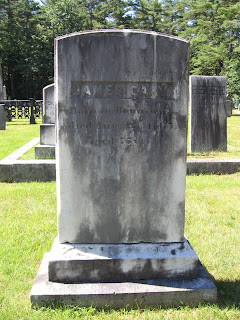 The grave of James Cary, Jr. in Pine Grove Cemetery, located in the second row from the right.


James Cary, Jr. died in Brunswick on August 25, 1865 at the age of 75. Though his obituary does not list a cause of death, it does state that "for a man of his years, borne down by disease, he was one of the most remarkable we ever knew." Clearly, James Cary left a mark on Brunswick that ran far beyond any of the accomplishments of Aaron Dennison.